Review: Theodosia and the Serpents of Chaos

I didn't have a chance to put up a new WOW post this week, but I do have another review to make up for it. 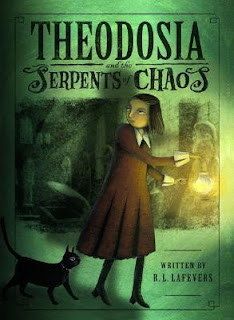 Theodosia and the Serpents of Chaos by R. L. LaFevers

At first glance Theodosia Throckmorton appears to be like any other normal 11-year-old girl living in London at the turn of the century. But Theodosia’s life is anything but normal. First of all, her archeologist mother is currently off on a dig in Egypt, uncovering treasures in the Valley of the Kings. And rather than going to boarding school or having a governess like a normal, respectable girl her age, Theodosia spends her time exploring the Museum of Legends and Antiquities, where her father is Head Curator.

But that’s not the most unique thing about Theodosia either. It’s the fact that she seems to be the only one who can see the horrible black magic and curses that often accompany the Egyptian artifacts the museum acquires. Which means it’s up to her to break said curses too. When her mother returns from her most recent dig with the famed Heart of Egypt amulet, only Theodosia seems to notice that the item perfectly reeks of black magic. And the curse is a bad one. Bad enough that the entire British Empire might be at stake if she can’t figure out how to break it.

This is also a book that took me completely by surprise. I’m not sure why I didn’t pick it up sooner. I had kind of seen it hovering on friend’s bookshelves and wish lists online, but I wasn’t ever really interested enough to even investigate what it was about. And the cover copy is pretty boring, so if I had, I’m not sure I would have investigated further anyway. But I recently picked it up from the library as I was browsing, and I grabbed it the other day when looking for something new to start. Kind of a “hey, why not?” moment.

Theodosia narrates the story in first person, and her voice drew me in right away. First thing she already starts mentioning Egyptian artifacts and curses, which was a great hook for a girl who used to love (and still kind of does) all things ancient Egyptian. Theodosia’s story is engaging in its uniqueness. You want to know who this girl is, how she knows so much about ancient curses, and why she spends so much of her time in a museum. Then, as the story progresses, you add in mysterious characters, plot twists, secret societies, double agents, forbidden new friends… really, it’s a dynamite mix. I can’t wait to pick up the next one.

And on a side note, since I’m such a cover fanatic… I’m not a fan of the cover. Something about the artwork is off to me. Theodosia is really not a boring character at all, but I don’t think this cover makes her look intriguing in the least. Honestly, I think if I saw this at the bookstore or library I would probably pass it right by. Which, obviously I did, since it’s been out since 2007. So this is definitely a case of don’t judge a book by its cover!

Available at Amazon.com in Paperback or Kindle
Add to your Goodreads shelf
Check availability on Paperbackswap.com
Posted by Alyssa F at 7:53 PM

We have fans of the Egyptian era as well. This might be a bit too young for my readers but they've been busy with some other Egyptian themed books - Cleopatra's Daughter and Nefertiti both by Michelle Moran. Have you read these?

I have read part-way through Cleopatra's Daughter and enjoyed it. I can't remember why I had to put it down, I need to finish it.

If you enjoy Nefertiti, you should also check out The Heretic Queen, which is the sequel to that book (I think it's about her niece? Egyptian family trees confuse me)

If you're looking for another book about Cleopatra Selene (like Cleopatra's daughter) there's one called Cleopatra's Moon that just came out. I haven't read it yet, so I don't know how it is. I recommend staying away from Lily of the Nile for content reasons. It might not bother some people but it was too "spicy" for me.

Carolyn Meyer, who is one of my all-time favorite historical fiction authors also has a book about Cleopatra, Cleopatra Confesses.

I'm going to have to comb my brain for more Egyptian suggestions...