So I know it’s been a while since I’ve done reviews. And despite the fact that things are little crazy around here recently (see previous post about impending court date and Disneyland trip), I would like to get back into doing more reviews here on the blog. So I’m going to start with this graphic novel series I picked up recently. 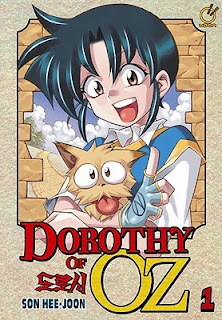 Dorothy Of Oz by Son Hee-Jun

This is a sort of manga-style retelling of the Wizard of Oz story. Or more appropriately, a manhwa retelling, since it hails from Korea instead of Japan. But the artistic style is pretty typical of your average manga shojo series. Quick side note: favorite character is Toto. Why? Because he is just so darn adorable! He’s like a little ball of fluff with ears and legs. But anyway, moving on.

Dorothy Of Oz, not to be confused with an upcoming animated sequel to the Wizard of Oz (which I found out about in my Google searching for images), is the story of Mara Shin. Like Dorothy, she finds herself unexpectedly in the Land of Oz, and is chiefly interested in finding her way back home. Though in a twist of events, she ends up in Oz more like Alice ends up in Wonderland, by following Toto down a dark alley that leads to a yellow brick road. There, she meets up with the typical characters: scarecrow, tin man, cowardly lion, though not necessarily in the form you would expect them. I won’t give away how they are different here, as it would ruin the plot. Everyone is so excited to meet her, because they think she’s Dorothy, who’s been prophesied to return to Oz and fix everything that’s gone wrong since she left. The problem is, Mara isn’t Dorothy, she’s Mara, and she doesn’t want to save Oz, she just wants to get back home to Korea.

This is an Oz that’s both familiar, and completely alien. The role of magic is much more prevelanet, and it appears as though Oz is ruled over by the four witches (North, South, East, West) since the Wizard has mysteriously disappeared. The land is covered by war, and there seems to be a lot of mercenaries roaming about as well, each with their own agenda. Of course, I’m not really sure exactly what’s going on, as in typical manga tradition, Volume 1 drops you into the middle of the story, has a bunch of action, and then drops back to the introductory material once the battle is over. It’s great for drawing a reader in (nothing more exciting than unanswered questions), but can be a little disorienting.

As a content warning for those who are so inclined, the book does feature quite a bit of fighting, and some resulting violence/blood is depicted, although it’s toned down a lot from some manga I’ve seen. There’s also a typically manga skimpy fighting outfit for Mara, which is quite sexed-up. Those familiar with manga will know what I’m talking about, but if this is your first foray into the genre, you have been warned. As of the writing of this review, I’ve read three of the books in this series (the aptly named Volume 1, Volume 2, and Volume 3). Unfortunately, it looks like the series quit after Volume 4. And based on what’s happened so far in just the first 3 books, I’m not optimistic the action can all be wrapped up in that last book. So it looks like I might have to just resign myself to a lot of unanswered questions. But I will still definitely pick up that last book, just as soon as I can get it from the Interlibrary Loan.

Overall, it tends a bit to the mediocre side of things once you’re no longer reading and trying to figure out what’s going on in the story. But the storyline is engaging enough, and I think those who love books that have anything to do with Oz will enjoy it. And I would recommend it to those readers based on that facet alone. As long as you can get past that possibility of there not being a true ending after Volume 4, that is.

Although apparently out of print, it is available at Amazon.com in Paperback
Add to your Goodreads shelf
Check availability on Paperbackswap.com

If you'd like a more classic, and in my opinion stronger, Oz-related graphic novel, you should check out the adaptations of the original L. Frank Baum Oz books that are published by Marvel.   The story is done by Eric Shanower (a veteran of both Oz adaptations and graphic novels) with excellent artwork by Skottie Young.  I haven't read one of those that I haven't enjoyed yet.  For those wondering on the chronology, they follow the original oz books: The Wonderful Wizard of Oz (Graphic Novel), The Marvelous Land of Oz, Oz: Ozma of Oz, Dorothy and the Wizard in Oz, and Road to Oz have all been published at this point, with The Emerald City of Oz to follow soon I believe.