This is another one I found at Becky's Book Reviews.

Here's the rules:
1. Go to IMDB.com and look up a bunch of your favorite movies.
2. Post three or four official IMDB "Plot Keywords" for each.
3. You guys guess the movies (no looking them up!)

So here goes. I'll post the answers in about a week, so you can go ahead and guess. Leave me a comment to let me know what you think they are!

Here's what happens when someone takes a little bit too much of thier pain medication. This is the last clip, and I hope you enjoyed this little random jaunt into the world of TV!

If you've decided to check out The West Wing more in-depth, don't forget it's available for you to buy on DVD. The best place to look is Amazon.com:

Today we have a clip for you from the Thanksgiving episode from Season 3. President Bartlet has decided to call the Butterball turkey hotline, with some hilarious results. ..

Join me again tomorrow for our last West Wing clip.

So for today's random movie clip, we're going to dive into one of my favorite TV shows, The West Wing. I was introduced to this series by my government teacher during my senior year of high school, and I love it. The political stuff is interesting, although sometimes it goes over my head, but what I really enjoy is the characters and the great sense of humor that shows up throughout the series. So for today's clip, here's the beginning of an episode where the group is naming a new nominee to the Supreme Court. My favorite part is the very end. You'll see why....

Of course, The West Wing is no longer on TV (although sometimes they do run some episodes on Bravo) but you can find all seven seasons on DVD. Look for more West Wing clips in the next few days too. :-)

I got this one from Miss Erin. I won't tag anyone, but it's fun, so try it!

a. Type your answer to each of the questions below into flickr search.
b. Using only the first page, pick an image.
c. Copy and paste each of the URLs for the images into fd’s mosaic maker. 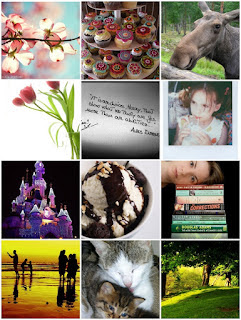 The Keepers: A Wizard Named Nell

Eldearth is a land divided. Many years ago the evil Lord Graieconn rebelled against his brother, forever diving the land between dark and light. Now, a thousand years later the Imperial Wizard, Keeper of the Light, is dying and darkness is creeping across the land. If a new apprentice is not found soon, the Keeper will die and Graieconn and his forces will control the land. Time is running out, and quickly. Many young men have undertaken the Apprentice Quest and failed. A prophecy has guaranteed the appearance of a new Imperial Wizard, but will one come forward before it is too late?

Princess Arenelle (Nell for short) of Xandria has just turned 11, the age of magic. Rather than being shipped off to Madame Sofia’s Academy of Magic to start her Witch training, she decides to undertake the quest. Her father expressly forbids the action since no woman has ever been an Imperial Wizard. Determined to save her failing land Nell switches clothes with a boy named Owen and sends him to school in her place.

Nell soon learns the quest is not an easy one. Wandering the land in order to find the Palace of Light, home of the Keeper, is a difficult task. As Nell travels with her demi-dragon Minna, she meets new friends and finds new enemies. As she grows closer to her goal she becomes more and more convinced that Eldearth is in bad shape. Nell is close, but will she complete the quest and become the first female Keeper?

Behind the wonderful story is a deeper message of doing what you feel is right, even in the face of great adversity. Nell’s determined and fiery personality is sure to win over any reader, although many of the adult characters can be somewhat two-dimensional. Koller has crafted a new and exciting fantasy world in Eldearth, and the history of the peoples is fully developed.

With a delightful cast of witches, wizards, dragons and other magical creatures, A Wizard Named Nell is sure to be a hit with young fantasy lovers. Older readers will enjoy it too, especially if they can easily overlook the more shallow characters. The book ends in a cliffhanger, so be sure to follow the rest of the story in The Wizard's Apprentice

and The Wizard's Scepter

. Welcome to the land of Eldearth!

*Please note* This was originally posted off-site. Clicking on the below link will take you to the full body of my review found at http://www.yabookscentral.com/