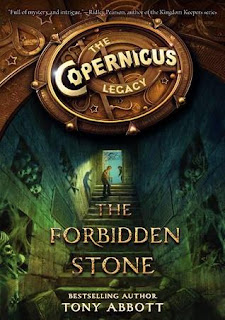 The Forbidden Stone (The Copernicus Legacy #1) by Tony Abbott

Wade Kaplan loves astronomy, something he learned from his Uncle Henry. When Wade, his stepbrother Darrell, and their two friends Becca and Lily get a strange email from Uncle Henry shortly before receiving word of the old man’s death, Wade is sure it has something to do with the star map Uncle Henry gave him for his birthday. Together the group of friends, although with Wade’s father, travel to Germany to attend Uncle Henry’s funeral, where they discover the strange email was in fact a code. The code leads to a clue which leads the kids to discover the mysterious Copernicus Legacy. Now they must race against time to find the other clue and protect this ancient secret before a sinister secret society gets to it first.

This book has all the hallmarks of a good adventure story, with international espionage, clues, secrets, codes, historical artifacts, and just enough wonder to push the book over the edge from realistic fiction to that speculative/science fiction “what if” sphere. This being the first book in a series, it does get bogged down a bit in the beginning through the introduction of the characters and the plot. That being said, it definitely does a good job of building the suspense through these introductions, which kept me going even though I felt a bit bored and confused at the beginning.

I may be posting a separate review of the additional books at another time, but I can confidently say that although my rating of this first book may be a little on the low side, the series definitely gets better the farther you go along. As of this post I’ve read all but the last (yet unpublished) volume, and I am eagerly awaiting its release in November of this year. I’m only awarding this one an “it was okay” rating, but I do still recommend it, especially as it gets better the farther the series goes on. This one also gets an Up All Night award leaf since the action kept me eagerly reading, especially near the end. Recommended especially for middle grade/teen readers that enjoy astronomy and/or spy stories.

Shady Glade Rating: 3 leaves and the Up All Night Award

Available at Amazon.com in Hardcover, Paperback, Kindle, or Audiobook
Add to your Goodreads shelf
Check availability on Paperbackswap.com
Posted by Alyssa F at 8:04 AM No comments: 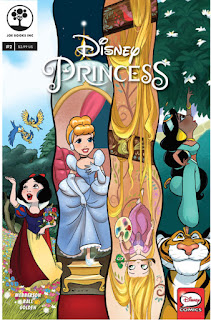 If you know me well, you know that I have a bit of a Disney obsession. Well, maybe more than a bit. My mom likes to say that my blood cells are probably Mickey shaped. And as a girly-girl at heart, there’s nothing I love more than the Disney Princesses. So when I found out about this new comic series that was being published, I knew it was a no brainer for me to try it. Sadly, I missed out on the first issue (it was sold out long before I got to the comic book store), but I was able to pick up this second volume on a birthday trip this year.

Unlike some serial comics, the Princess comics are done as a series of short stories with no correlation to each other, so it wasn’t a problem to pick up the second issue without reading the first at all. Each story is more of a behind-the-scenes type peek into the lives of the princesses, outside what the movies show of their stories. The balance of smaller 1 strip and large multi-strip stories is a good combination, and both types of strips have the perfect amount of humor. I particularly liked the story of Princess Jasmine dealing with her tiger Rajah at bedtime. Anyone who has ever owned a cat will understand that one.

And as much as I love the storytelling, I have to say that I love, love, love, the artwork. I am a big fan of Amy Mebberson from her Pocket Princesses fanfic comic on her Facebook page, and it is nice to see her Disney artwork in an official capacity. For those who haven’t seen her work before, I would describe this as a sort of Japanese “chibi” style, while still being very true to the actual Disney artwork. I will definitely look forward to collecting these comics!

Available at Amazon.com in Kindle (hard copy sold out)
Add to your Goodreads shelf
Posted by Alyssa F at 12:32 PM No comments: 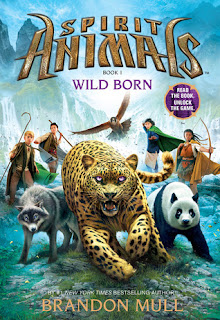 In the fantasy world of Erdas, each child who comes of age must go through a special ceremony. The purpose of this ritual is to see if the child summons a spirit animal; a special animal with which you form a spiritual/mental bond with that grants additional strengths to both human and animal. It’s kind of like your own personal animal best friend. Conor, Abeke, Meilin, and Rollan all summon spirit animals. But not just any animals. The wolf, leopard, panda, and falcon who apper during their ceremony are special animals, great beasts; animals of legend who have been foretold to return to Erdas in its greatest need. Together the four must work together and learn how to use their spirit animals in battle before the sinister forces taking over Erdas one country at a time have a chance to succeed.

I went into this one with pretty high expectations, mostly because I just love Brandon Mull. On the other hand, I’m always a bit worried with these multi-author series that Scholastic does (39 Clues and Infinity Ring being two other examples) just because I’m worried about continuity between character traits, world settings, plots, etc. I’m happy to say that Mull does a good job introducing the series. For a book that’s much shorter than many introductory middle grade fantasy books, there’s a nice balance between character introduction and the initial conflict of the series’ overall plot. Readers really only get glimpses of settings and characters other than the main four characters, but I felt it was enough to keep me satisfied, expecting that further explorations will occur in later books in the series. While there may not be a lot of substance literarily to this series, I think the kid appeal is definitely there, especially for kids who like books with animal characters. I plan on continuing with the rest of the series, which is always a good indication it hasn’t lost my interest so far.

Available at Amazon.com in Hardcover, Kindle, or Audiobook
Add to your Goodreads shelf
Check availability on Paperbackswap.com
Posted by Alyssa F at 9:12 AM No comments: