Sorry things have been a little sparse around here lately.  I've found it just a bit difficult to get back to hobby things after losing Greysen a few weeks ago.  But life goes on and things are slowly returning to normal.

I've been out of it enough that I've forgotten to remind everyone to make sure you nominate your favorite books of 2013 for this year's Cybils.  Pretty much any book published between 10/16/12 and 10/15/2013 for children, middle grade, or YA is eligible.

Head over to the Cybils site for all the details, and to nominate your favorites.  You have just over a week (until October 15th) to get those votes in!

And please, if anyone knows of a good YA non-fiction title published this year, make sure you nominate it! As I mentioned before, that's my category, and we're a little sparse on books.  :)
Posted by Alyssa F at 1:22 PM No comments:

Email ThisBlogThis!Share to TwitterShare to FacebookShare to Pinterest
Labels: cybils

Waiting on Wednesday: Ever After High

Today's pick requires a bit of a different introduction...

Has anyone heard of Monster High?  It's a book by Lisi Harrison.  I picked it up a couple years ago because Lisi was the author of one of my guilty pleasure series at that time, The Clique.  It's about a high school where many of the students are actually the sons/daughters of famous movie monsters (Frankenstein, Dracula, etc.) trying to fit in a normal high school.

Well, as it turns out, Monster High is actually a line of fashion dolls from Mattel.  I found that out the hard way when Googling pictures of the cover.  And I don't know which came first, the dolls or the book (or maybe the were released pretty close to each other).  But it turns out MonsterHigh.com has all sorts of stuff that's worlds beyond the book I first read.

So why do I bring it up?  Well, Little, Brown Book and Mattel have teamed up again.  This time, it's called Ever After High. 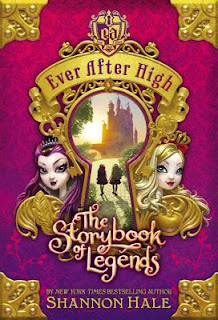 Ever After High: The Storybook of Legends by Shannon Hale

About the Book (copy from Goodreads.com): "At Ever After High, an enchanting boarding school, the children of fairytale legends prepare themselves to fulfill their destinies as the next generation of Snow Whites, Prince Charmings and Evil Queens...whether they want to or not. Each year on Legacy Day, students sign the Storybook of Legends to seal their scripted fates. For generations, the Village of Book End has whispered that refusing to sign means The End-both for a story and for a life.As the daughter of the Evil Queen, Raven Queen's destiny is to follow in her mother's wicked footsteps, but evil is so not Raven's style. She's starting to wonder, what if she rewrote her own story? The royal Apple White, daughter of the Fairest of Them All, has a happy ever after planned for herself, but it depends upon Raven feeding her a poison apple in their future.What if Raven doesn't sign the Storybook of Legends? It could mean a happily never after for them both."


So why this pick, when I am obviously so not the target audience for this series?  Two words: Shannon Hale.  I don't think Little, Brown could have picked a better author to bring this new series to life.  And I am so, so excited.

It's kind of an odd twist really.  Monster High started out as a series of Young Adult books, but after about 4 or so, switched to more of the middle grade audience.  I'm sure it's because it more closely matched the demographic of the site.  For me, I discovered the site after I had read 2 of the books.  I enjoyed the storyline on the website much more.  The YA books just felt like they tried to be so full of teenage DRAMA!!!! and they just tried a bit too hard.  The website is totally cool with the idea that this is a world populated with monsters, while the books tried to squeeze them into everyday life.  I just don't think the message meshed as well.

Anyway, this series is starting out fulling in the MG category.  Which is fine by me, because as I said before if it's Shannon Hale I will read it, no matter what age group it's meant for.  And as fun as the idea of sons/daughters of  monsters is, the idea of fairy tale offspring is much more appealing to my romantic nature.  :)  I've poked around a bit at EverAfterHigh.com already, where they already have some videos introducing the characters and such up.  Looks like it will be a great fun/fluffy series to try.  Really, it's very squarely in the "tween" category, but who says you're too old to satisfy your inner child on occasion?

Ever After High: The Storybook of Legends will be released on October 8th, 2013.

Available at Amazon.com in Hardcover or Kindle
Add to your Goodreads shelf
Check availability on Paperbackswap.com
Posted by Alyssa F at 7:31 PM No comments: