So in my renewed determination to keep up with my blogging, I am back today with a Waiting on Wednesday post.  Yay! 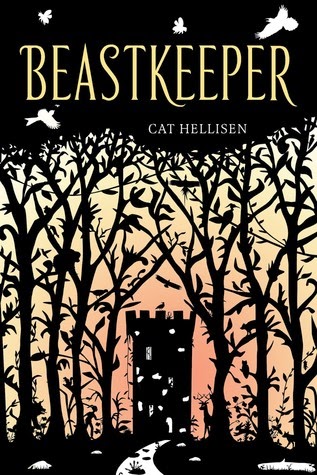 
About the Book (copy from Goodreads.com): "Sarah has always been on the move. Her mother hates the cold, so every few months her parents pack their bags and drag her off after the sun. She’s grown up lonely and longing for magic. She doesn’t know that it’s magic her parents are running from.

When Sarah's mother walks out on their family, all the strange old magic they have tried to hide from comes rising into their mundane world. Her father begins to change into something wild and beastly, but before his transformation is complete, he takes Sarah to her grandparents—people she has never met, didn’t even know were still alive.

Deep in the forest, in a crumbling ruin of a castle, Sarah begins to untangle the layers of curses affecting her family bloodlines, until she discovers that the curse has carried over to her, too. The day she falls in love for the first time, Sarah will transform into a beast...unless she can figure out a way to break the curse forever."

So unless you couldn't tell from the description, I'm pretty sure this is a retelling of Beauty and the Beast.  And you know I love fairy tale retellings.  But I like the way this one has scrambled it around a bit with the girl turning into the beast.  Sounds like it will be good.  :)

You don't have to wait too long to read Beastkeeper, since it will be released on February 3, 2015.

Currently available for pre-order at Amazon.com in Hardcover and Kindle
Add to your Goodreads shelf
Check availability on Paperbackswap.com
Posted by Alyssa F at 1:03 PM 1 comment:

I know I’ve been a bit absent lately. Still struggling to find internet access. But my goal is to work myself towards more active participation over here. Thanks to all of you who’ve stuck through these ups and downs with me over the last few months. And welcome to any new readers too. :)

Anyway, moving on to today’s post. In addition to getting back to regular posts, I just discovered this way cool weekly event called Top Ten Tuesdays hosted over at The Broke and Bookish. They post a book related question each Tuesday, and participants have the chance to come up with a list of 10 books that answer that question.

Sounds like fun. So although I don’t know how often I’ll participate, I thought it would be fun to do so today anyway. Today’s question is: Ten Books I'd Love to Read With My Book Club/If I Had A Book Club.

Interesting question for me, since for the first time ever in my life, I actually am a member of a book club. I found out in November that a group of ladies from my church do participate in a monthly book club and they invited me to join. Of course, that being said, most of the books we’ve read so far totally aren’t my thing. But since we take turns choosing books, this is actually something that I’ve thought about (for when my turn comes around).

When choosing a book for book club, I think it’s better to choose something that you’ve already read, since that way there’s no surprises content-wise that you can’t warn people about before they start the book. As a result, I’ve approached this question narrowing it down to books I’ve already read.

So here’s 10 books I’d like to read with my book club (in no particular order):

Austenland: A Novel by Shannon Hale - Normally I don’t like adult contemporary romance, but I picked this one up because it’s Shannon Hale and Jane Austen mixed together, what could go wrong? And I loved it. This is a book that everyone who I’ve ever passed it onto has liked. And the movie isn’t bad either, even though it doesn’t follow the book exactly.

The Host by Stephenie Meyer - Okay, I know full well I’m going to catch flack for this one because Stephenie Meyer has kind of become a cliché name due to the Twilight books. And yes, I enjoyed the Twilight books. Never a big fan of them, but they were fun to read the one time. However, I really liked her book The Host (her adult book) a lot more. But most of the people I talk to won’t give it a try because of how they feel about Twilight etc. So I wish more people would try this one so I could discuss it with them.

We Bought a Zoo - Also a cute movie. Although the movie is pretty much nothing like the book. The actual book is a non-fiction memoir about the opening of Dartmouth Zoological Park in England. It’s a little slow to start because there is a lot of background information to slog through before you get to the specific anecdotes about owning/refurbishing a zoo, which is why those I’ve shared it with have had a hard time with it in the past. But I love re-reading this one, because the stories are quite funny if you can get through the background information, and it’s wonderful to think that they all actually happened to someone somewhere. Definitely an escape book for me.

Agatha H. and the Airship City by Phil Foglio and Kaja Foglio - This one is a little weird, because I actually read the graphic novel version of it first. But knowing it might be hard to entice people to read graphic novels if they’re not used to it, there’s also a book version which pretty much follows the comic word for word. If you like steampunk, this is a great series for you. And a good introduction to the idea of steampunk if you’re not familiar with it already. I love the characters and the mystery of the whole plot of this series.

So here’s where I get into trouble. My book club is made up of adults, and although we have read one YA book since I’ve joined (Graceling by Kristin Cashore, which was excellent, by the way, and I don’t know why it took me so long to read it) but most of the books I read are YA ones. So the above four are my “adult” choices. But if I could, I would share these YA/Kid titles with my book club too.

Dealing with Dragons by Patricia C. Wrede - This one lands firmly in the “kid” category, but it has been one of my favorite books since childhood. Who wouldn’t want to share one of their favorites with others? No brainier for this list.

The Last Dragonslayer by Jasper Fforde - Fforde normal writes adult novels, so although this book is marketed as YA (probably because the main character is 16) I think it’s very translatable to adult readers. I love the inventiveness of the world created in this one, as well as the spunky main character, and I enjoyed the sequel a lot too. Hopefully I will be able to get my hands on the third one soon.

A World Without Heroes (Beyonders) by Brandon Mull - I love pretty much everything Brandon Mull does, but I think the Beyonders series grapples with more larger and complex issues than his Candy Shop War and Fablehaven series do. I’ve always been disappointed that this one is billed as middle grade level, as I really think it would appeal more to YA readers because of its complexity, and I think most teens won’t give it a chance because it’s usually shelved in the kids section. I think this one could spark lots of great discussion with a book club.

Heist Society by Ally Carter - Again, I love pretty much everything Ally Carter does, but Heist Society has a special place in my heart among her books. I don’t know why this particular one resonated with me so much, but it is another one of those books that everyone I recommend it to loves. I even got my brother to read it (and its two sequels) and he doesn’t read “girl books”. So that’s a success story right there.

A Long Way From Chicago by Richard Peck - I think this one is considered a “modern children’s classic”. I picked it up because it was required reading for my YA lit class in college. Even though it’s a relatively short children’s book, the merit of this one is definitely high. It’s a great collection of connected short stories about growing up during the years of the Great Depression. Seriously, if you haven’t read this one yet, you should.

Holes by Louis Sachar - If you haven’t read Holes yet, you need to. End of story. Yes, it’s a kid’s book, but it’s great anyway. Like Harry Potter. I’m serious, go read if you haven’t. Now.
Posted by Alyssa F at 12:50 PM No comments:

Hello everyone!  Hope you had a great Christmas, New Year, and you're getting back into the swing of things.

I got a cold for Christmas (yay) so I've been trying to get over that, which has slowed me down a bit.  Add in the complete lack of internet access at our new house out at the farm, and I am behind in blogging a bit.  But hopefully things will settle down with me by the end of the month.

In the meantime, I am totally late in announcing it, but if you haven't already, check out the Cybils finalists for 2014.  I'm always relieved when Cybils Round 1 is over, since now it's the judges problem to hash out which of the awesome books gets the ultimate spot.  I don't want that kind of power.  :)
Posted by Alyssa F at 6:52 AM No comments: