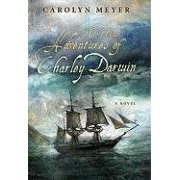 This is going up a little later than I intended, but I've been sick with a stomach flu and I had Cybils deliberations this afternoon. But without further ado, here's my last Waiting on Wednesday post for 2008:

From Amazon.com: "Young Charley Darwin hated school—he much preferred to be outside studying birds' eggs, feathers, and insects. And so, at the age of twenty-one, he boarded a ship called HMS Beagle and spent five thrilling but dangerous years sailing around the world, studying plant and animal life that was beyond anything he could have imagined.Here, just in time for Darwin's 200th birthday and the 150th anniversary of the publication of his groundbreaking On the Origin of Species, historical novelist Carolyn Meyer tells the story of his unconventional adventures. It's the story of a restless childhood, unrequited teenage love, and a passion for studying nature that was so great, Darwin would sacrifice everything to pursue it."

I have to admit, I'm guilty of wanting to read this one simply because I love the author. Carolyn Meyer is so awesome! As a Biology minor, I hear about Charles Darwin all the time, so I think it will be interesting to read another side of his story, and Meyer is sure to do a great job. Plus, don't you just love the way Harcourt does her covers? They have such a misty/historical quality to them.

will be released on January 1 (tomorrow!) and is available for pre-order on Amazon.com:

Contest Monday: Win a copy of The Debs

As I mentioned earlier, it's time for our first Contest Monday! Yay! Today's prize is a free paperback copy of Susan McBride's The Debs

About the book (from back cover): "The heat is on down South! Debutante season in Houston is under way, and four ultraprivileged girls await thier invitations from the illustrious Glass Slipper Club.
Laura Delacroix Bell: This trust-fund baby's size-fourteen figure doesn't stop her from attracting hot boys or the admiring eye of the GSC selection committee. But a salacious secret could take her out of hte running quicker than you can say 'Rosebud.'
Michelle "Mac" Mackenzie: She'd rather bury her nose in a book than embrace her deb destiny. But Mac's debut is her late mother's dream and her stepmother's obsession. If Mac doesn't bow out now, she may become the crankiest deb in Texas.
Ginger Fore: She hopes to wear her grandmother's vintage ball gown on her big presentation day. But when a mysterious college guy puts Ginger's deb eligibility in jeopardy, she may end up wearing an unflattering orange jumpsuit instead.
Jo Lynn Bidwill: A former beauty queen, she makes it her mission in life to take out the debu-trash. For now, Jo Lynn's sights are set on Laura Bell, and what she has in store for her bitter rival is anything but ladylike.
The Debs...high society doesn't get any lower than this."

How to enter: Send an email to shadyglade (AT) mail (DOT) com with the subject line "The Debs Contest" and include:
Rules: The contest is open until Monday, January 5, 2009 when the new contest will be posted. The winner will be chosen by a random number generator. One free entry per person allowed. Post ab0ut the contest to earn extra contest entries. Questions? Post a comment or email and ask.
See? Simple right? So go ahead and enter right away. Good luck to everyone! I'll announce the contest winner on Tuesday, January 6th.
The Debs

is also available for purchase from Amazon.com:
Posted by Alyssa F at 4:52 PM 1 comment:

Hello everyone! I'm back. Well, sort of. I know I've been scarce lately. Things have been crazy with graduation and the holidays and moving back into the room my brother commandeered while I was off at school. Plus, I've been furiously trying to get through as many Cybils nominees as possible, as the deadline fast approaches. I know, last minute, but in my defense there were over 160 nominees in my category this year.
Anyway, I'm gong to try to get back in the swing of things. I have a lot more Waiting on Wednesday posts to put up, as well as about 50 book reviews (give or take) that are just waiting to be written. I'll get them up when I can!

But this post is also to announce (another) new feature. Starting this afternoon, I am announcing the addition of (drumroll please)....

Contest Mondays!
See, I've got all these books that I will never be able to read again, and some that haven't been read at all, and probably never will. So I'm going to be having a giveaway on Mondays to pass on all those new and gently used, wonderful books to other people who will have the chance to enjoy them. Why Monday? Well, Wednesdays are already scheduled, and lots of people already do giveaways on Friday. I wanted to be different, and I don't know about you, but I'd like a pick-me-up on Mondays! So it's going to be Monday afternoons for free books at the Shady Glade, and look for that post later today!
Posted by Alyssa F at 7:37 AM No comments: 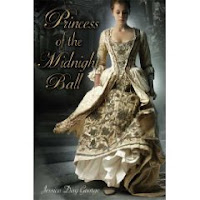 So I'm busy studying for graduation, but I wanted to throw this up real quick. :-)

From Amazon.com: "A tale of twelve princesses doomed to dance until dawn… Galen is a young soldier returning from war; Rose is one of twelve princesses condemned to dance each night for the King Under Stone. Together Galen and Rose will search for a way to break the curse that forces the princesses to dance at the midnight balls. All they need is one invisibility cloak, a black wool chain knit with enchanted silver needles, and that most critical ingredient of all—true love—to conquer their foes in the dark halls below. But malevolent forces are working against them above ground as well, and as cruel as the King Under Stone has seemed, his wrath is mere irritation compared to the evil that awaits Galen and Rose in the brighter world above.

Captivating from start to finish, Jessica Day George’s take on the Grimms’ tale The Twelve Dancing Princesses demonstrates yet again her mastery at spinning something entirely fresh out of a story you thought you knew."

Fairytale retelling? Twelve Dancing Princesses? I am so there! The cover alone makes me want to read it.

will be released on January 20, and is currently available for preorder on Amazon.com: