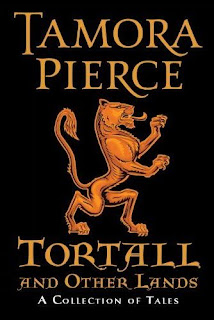 Today's feature is another book that's being released soon, although I only recently found out about it a little while ago.

Tortall and Other Lands: A Collection of Tales

About the Book (from Amazon.com): "Collected here for the first time are all of the tales from the land of Tortall, featuring both previously unknown characters as well as old friends. Filling some gaps of time and interest, these stories, some of which have been published before, will lead Tammy's fans, and new readers into one of the most intricately constructed worlds of modern fantasy."

Not much of a description, but I pretty much love all of Tamora Pierce's work. And of everything she's done, I like the books set in Tortall the best. So I'm really, really excited about this one. The fact that some of the stories have been published before doesn't bother me either. I'm pretty sure I've only read one Tortall short story before, in Bruce Coville's anthology Half-Human. I'm really kind of "eh" about the cover, but it's a Tortall book, so I don't care. :)

Tortall and Other Lands: A Collection of Tales

will be released on February 22nd (almost here!) and is currently available for pre-order on Amazon.com:

OMG thanks SO much for posting about this! I met Tammy at Sirens '09 and she mentioned that this was in the works, but she wasn't able to come to Sirens last year and I totally forgot about this book being on it's way! Scooting over to order it this very moment!

I still haven't ready anything by Tamora Pierce except for a couple of short stories in collections (I know. What have I been doing with my life?!). I need to get caught up with the rest of the world. Nice pick!

Great choice!! I haven't heard of this one yet! Thank you for sharing!

I just finished it, and it was really wonderful. I'm all about sharing the love of Tamora Pierce.

The Protector of the Small series is just all kinds of inspirational and lady powered.