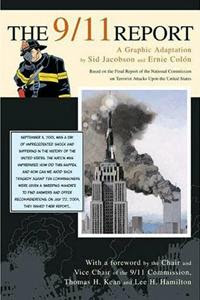 The 9/11 Report: A Graphic Adaptation

When the 9/11 commission published its 500+ report of its investigative findings, I can tell you I was not exactly first in line to buy it. So at first this book seemed like the perfect solution: a graphic novel adaptation. After all, isn’t everything easier to read when it has pictures?

The book basically summarizes the Commission’s findings about the tragedy of September 11th. Don’t expect to find an in-depth report of what happened on that horrible day. After the first chapter summarizes the plane crashes, the rest of the book attempts to explain how these attacks happened by examining “the new terrorism.”

I truly had mixed feelings about this one. For one thing, even after 5 years, it is amazing how much thinking about 9/11 hurts. I was quite engaged for the first chapter or two when it was discussing the events that actually occurred on 9/11. The most useful thing was a timeline showing the significant events of the 4 planes, so it was laid out graphically before you. After the 2nd chapter, I felt as though I was merely reading to finish. Although the ideas presented were interesting, and most definitely important (politically, if nothing else), the information was not really set up for a graphic novel. There was too much text, and the layout of the captions was very difficult to follow because it changed formats on every other page.

Overall, a great way to avoid reading the 500 page book. Unless you go for that sort of thing. It was a good book, but a horrible graphic novel. I warn you though, if you do read it, you might need a couple tissues for the first chapter.