I've seen this feature on a few blogs, although Teen Book Review was the first I noticed it on. The idea is to feature a book that is scheduled to be released in the coming months every Wednesday. And since I seem to be a helpless bibliophile, this is an exercise right up my alley. Here's my first pick, and you can expect more of these as time goes on. :-) 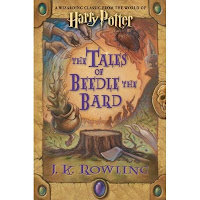 The Tales of Beedle the Bard

Might as well start this feature off with a bang. I don't think I really have to explain what this book is; it's pretty much pervaded the internet already. Even if it isn't strictly a Harry Potter book, I am eager to return to the world of one of my favorite series.

The Tales of Beedle the Bard

is available for pre-order from Amazon.com:

Oh yes, I'm definitely getting this one!

If you happen to be in India, checkout the exciting offers on this book at
TheStorez offers

Honestly? I'm not really sure about this one-- it smacks too much of 'cashing in' on a finished story, which disturbs my indie soul. I'll probably rent it from BookSwim and see if I like it enough to buy it.