The First Day of Christmas Contest

It's time to start the 2010 version of The 12 Days of Christmas Giveaway-A-Day! If you haven't already, make sure you've reviewed the rules so you know how to play the game.

by Sabrina James. The winner of this prize will have the choice of keeping it, or trading it in for one of my mystery prizes (which includes a box of upcoming ARCs and books) starting after December 20th in our game of Holiday Let's Make A Deal.

To enter, tell me which book this cover clip belongs to: 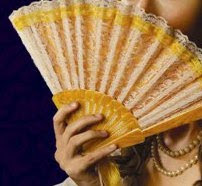 Enter your answer into the form below. If you don't know and still want to enter, you can use one of your two Wild Cards for today. Contest is open until December 19th at midnight, and open internationally.

About the Book (from Amazon.com): "A game of Secret Santa has everybody guessing. Presents? Kisses? Maybe both.

Noelle, a hopeless romantic, just knows that her gifts have to be from her senior crush! And geeky Froggy thinks the game is the perfect way to get super-popular Celia to fall for him...except she thinks his gifts are from Jake, the school's resident bad boy, and starts to crush on him! Romantic mishaps abound, but all is revealed the night of the Winter Dance, where there's more than one surprise waiting under the mistletoe! "
Posted by Alyssa F at 9:02 AM

Thanks for such a nice Christmas Contest! :D
{makes me feel all warm & happy, which is a good thing since it's only 12 degrees outside lol)

These cover-guess contests are my favorite! Thanks for hosting.

Thank you so much for this amazing opportunity!!

thank u so much for awesome gifts