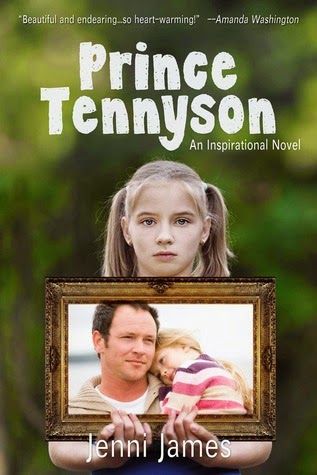 The first thing you need to know about Prince Tennyson is that it’s an inspirational book about a 10-year-old’s search for God. So if that kind of thing isn’t your thing, this book isn’t for you. The other thing is that it will make you cry. Really. I totally mean that completely and 100%.

This is the story of a broken family and their search for healing, told through the eyes of ten-year-old Chelsea . Chelsea, her mom, and her brother and sister have just moved in with their grandmother in Phoenix after Chelsea’s mom suffers a mental breakdown. The breakdown is due to the death of Chelsea’s father, nicknamed Prince Tennyson, who died a year ago in military service in the Iraq war. Not only is Chelsea dealing with the issues of adjusting to a new school, new friends, and a new house, she is watching her mother become emotionally weaker and weaker as she struggles to deal with the aftermath of her husband’s death.

The turmoil in her life leads Chelsea on a quest to find the answer to one question: Is God real? And although her grandmother assures her He is, her mother is not. As Chelsea struggles to find her own answers, she seeks out church, the bible, asks her new friends, anything that can show her God is real. Because if heaven is not real, she’s afraid she will never get to see her dad again.

This is one of those books that’s kind of hard to explain for me. It’s not really plot driven much, which is weird for my usual taste, because I tend to like plot over characters in the books I pick up. But there’s something about Chelsea’s innocence and genuineness that kept me reading. I got to the point where I absolutely could not pick this book down.

I have to say first that it has been a long time since I have cried over a book. The last one I remember for sure is Where the Red Fern Grows. There might have been some other ones in there over the years, but I didn't even cry after the bloodbath in the later Harry Potter books. (Movies, on the other hand, will get me every time; I even cry for Hallmark commercials). So when I saw from other reviews that this would make you cry, I was skeptical. And I made it through most of the book without crying, that’s for sure. But the last 20% of the book or so had me sobbing in a way I haven’t cried for a book before (except for reading scriptures). Unfortunately I don’t want to go into too much detail about why, because it will completely spoil the ending. The emotional release I got from that crying, however did cause me to be extremely emotionally satisfied with the conclusion.

If I had one complaint about the book, it would be that at times Chelsea’s narration seemed a little juvenile for a 10-year-old. On the other hand, I don’t hang around with many 10-year-olds on a day to day basis, so if they were writing in a journal, maybe that is what it would sound like. I just noticed that it was a very different toned voice from the other middle grade books I've read recently.

I’m assuming if you've made it thus far into the review that you must be religious at least to some extent, so I think what really resonated with me as far as Chelsea’s story is that I think everyone who is religious has been through this journey at some point. We've all had to discover if whatever we are placing our faith in is real or not. And although this is a "kid’s book", it was thought-provoking for me as a young adult as well.

Available at Amazon.com in Paperback or Kindle
Add to your Goodreads shelf
Check availability on Paperbackswap.com
Posted by Alyssa F at 1:32 PM

Sounds an ideal read for tweens!