Review: Don't Know Much About the Presidents 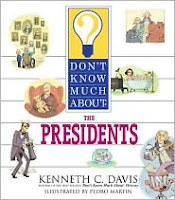 Don't Know Much About the Presidents

In celebration of President's Day, I decided now was a good time to pick up this book that came to me in the mail a few months ago. The recently updated Don't Know Much About the Presidents offer facts and trivia on all 44 of our presidents, from George Washington to Barack Obama. Each president is given a least one page (some have up to three) to describe facts and trivia about each president. A timeline of major presidential events completes each page.

First the positive. This book is definitely a great way for kids to learn more about the men who've run this country. The facts are presented in a question format, which makes them much more accessible than random lists of facts. The illustrations are also quite hilarious, and as someone much more versed in American history than the average elementary student, I had fun reading this book. If you're wanting to know things like who was the first president to ever get a speeding ticket (in a horse and buggy, no less), then this is a good book for you.

However, the book still had some flaws. Mostly I took issue with the fact that the book was (in my opinion at least) biased. Certain presidents were singled out as "bad" presidents, and although I agree with some of the author's choices, I don't agree with some of the more implied choices. It's hard to reduce some of the impacts these men had down to three paragraphs in a children's book, especially when they had eight years in office.

This flaw aside, I still think it's a fun book. I'm frustrated with the overall presentation, but it certainly had enough facts to keep kids going. Overall, it's a good introduction to the presidents, and a way to get small toes wet about American history. You can also enter a contest to win this book through Feb. 23rd.