It's a new month, which means it's time to have a new comment contest!

How to enter: Each qualifying comment you leave on this blog equals one entry into the pot. The more you comment, the better chance you have at winning. Your fate is in your own hands. So if you really want the book, comment a lot! The top 10 commentors will get extra entries into the contest. At the end of the month I randomly pick one winner for the prize. It's that easy. Qualifying comments do not include "please enter me" or other contest-related comments. 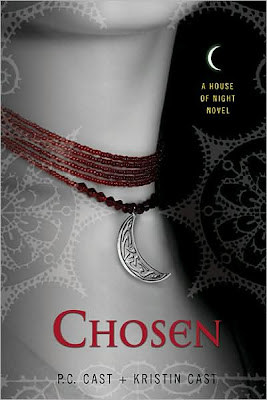 This month you have a chance to win a new ARC copy of Chosen: A House of Night Novel

by PC and Kristen Cast. This is book three in the House of Night Series. To win it, comment away until 11:59 p.m. PST on November 30th. This contest also will include all comments made from October 24th and on, since I closed last month's contest a little early.

About the Book (from Amazon.com): *Spoiler warning for those who haven't read Book 1* "Bloodlust and dark forces are at work at the House of Night, and fledgling vampyre Zoey Redbird’s adventures at the school take a mysterious turn. Those who appear to be friends are turning out to be enemies. And, oddly enough, sworn enemies are also turning into friends. So begins the gripping third installment of this “highly addictive series” (Romantic Times), in which Zoey’s mettle will be tested like never before. Her best friend, Stevie Rae, is undead and struggling to maintain a grip on her humanity. Zoey doesn’t have a clue how to help her, but she does know that anything she and Stevie Rae discover must be kept secret from everyone else at the House of Night, where trust has become a rare commodity. Speaking of rare, Zoey finds herself in the very unexpected and rare position of having three boyfriends. Mix a little bloodlust into the equation and the situation has the potential to spell social disaster. Just when it seems things couldn’t get any tougher, vampyres start turning up dead. Really dead. But, as Zoey and her friends find out, things are not always what they seem…"
Posted by Alyssa F at 3:05 PM

Chosen sounds like such a great book! I have yet to read the first ones in the series - I have book 1 but haven't gotten around to reading it yet.

The cover of this book reminds me of the Disney movie Twitches! It looks and sounds good!

I love this series!

I really love House of night... is a very nice serie!

I just got through with Betrayed and I loved it! I let my sister borrow the first two so I'm hoping to get her addicted as well!

I think that if the Zoey is smart, she takes Stark...

I wanted be a vampire of house of night because
seems that there is only beautiful and sexy guys (laughs).

Hi :)
Thank you for the contest giveaway.
Isn't the cover gorgeous?
All the best,
RKCharron
xoxo

This sounds like an interesting series, but I'm kinda leery of the whole she-has-three-boyfriends thing. I'm not a fan of infidelity, which seems inevitable if you have more than one significant other. :(

Ha ha ha! I love the cheesy names of the "vampyre" and friend: Zoey Redbird and Stevie Rae (Vaughn?).

Yeah I thought Stevie Rae's name was a little cheese-tastic too, Sheryl!

So far I have only read the first two in the series. I need to read this one!

In this series Chosen is my favorite cover :)

I'm sad to say that I have not started reading this series yet.

I don't have english books of house of night. So I would love win one!!
anecullenshinoda at gmail dot com

I've been on the waiting list for this book at the library for 2 weeks now...people need to read FASTER! I guarantee I will finish it the day I get it.

It is one of the best vampire series I have ever read! Team Stark forever!!!

I think this series is an interesting take on vampires. Very unique

I did not like knowing that the series will have 12 books that still have a lot of history to go, and some authors are disoriented and do nonsense. If she kill the Stark I stop reading!

I just got a copy of Tempted (even though I still have 3 more books to read before it lol)!

The book that I more liked was Tempted !!!!

In the first books I loved Erick, but then he was getting so annoying and possessive that just changing the team.

I finally started to read Chosen...loving it so far!

Oh, and I picked up the 2 books after Chosen from the library so I am set for my House of Night fix for the next few days.

I never liked much of Loren. By that time I still liked Erick.

just read Untamed and Hunted...couldn't put them down, they were amazing.

I'm curious to know how will be the movie of House of night .

I would love to be entered in your draw. Sounds wonderful. Thanks. wandanamgreb(at)gmail(dot)com