Today I'm happy to welcome as my special guest Clare B. Dunkle, author of one of my all-time favorite books The Hollow Kingdom

, among several other books. Clare was kind enough to take a little bit of time out from her travels to answer my few questions. So here's my interview, with my questions in bold.

Your first four books started as letters to your daughters while they were at school. What made you decide to try and publish your stories? Or did you always write them with the intention of sharing them beyond your family?

I had finished the first book, The Hollow Kingdom

, and the trained YA librarian in me said, "Hey, that's not bad! I should submit it somewhere. I would have enjoyed reading this if it had been in my middle school library." 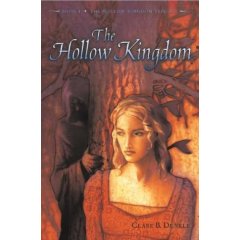 But I'm a wimp, so I didn't really want to tangle with the problems of the publishing world--especially the problem of finding an agent--so I spent a couple of hours on the web, looking up the reputable publishers whose names we can all recite from seeing them so often on the title pages of our books, in order to find out if any of them would accept an unagented submission. Lo and behold, Henry Holt & Co. (the Books for Yong Readers division) did accept unagented manuscripts at the time, and they had published the Prydain series, which remains one of my favorite series to this day. I found a padded envelope the next morning, threw together a cover letter, and put The Hollow Kingdom

in the mail. Six weeks later, my editor at Holt contacted me, and that was that. Reka and I wrote fun emails back and forth for a few months, and presto! I was a published author. In fact, I had four manuscripts accepted before I really had to grapple with the idea of whether or not I wanted to be a writer.

Wow. That's such a great publishing story. What was it like living in Germany for seven years? 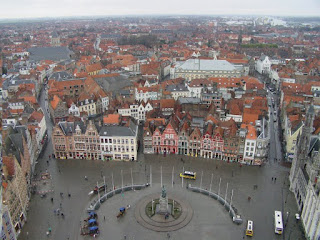 It was wonderful. I'd love to go back, and we may go back in a few years. Of course, it was inconvenient that the libraries and bookstores were full of German books! Amazon.com became our neighborhood bookstore. But we could get up early on a Saturday, take a flight from our nearby "cheap fares" airport, and be in Italy or Norway by 9:00 in the morning. We could play around in a new country for a couple of days and be back in time for my husband's Monday morning meetings.

That does sound wonderful. You must have done a lot of travelling. Did you have to readjust to living in the US when you moved back?

Yes. It takes so long to get anywhere! I have to drive all day just to get to another state. But I have to say, it's nice to be back in a country that has air conditioning. And screens on the windows. And drive-through lanes at the coffee shop.

Air conditioning is definitely a plus. Do you have a favorite character?

No. Do you have a favorite pet? I'm god to my characters, and I wouldn't be a very nice god if I didn't love them all unconditionally. I even love the villains and feel bad for them when they make poor choices. My editor complains about how hard I try to be fair to my villains. And some books don't have a villain at all, just a hero doing stupid things. (That's how I felt about In the Coils of the Snake

My writing environment is wherever I can pop open my Vaio ultraportable laptop. I love it because it's so cute and reliable--at least three hours of battery life even after two years of use. I wrote at home before this year, but now I take my Vaio to the Trinity University library here in San Antonio, where I used to work as a librarian and where I still have lots of friends. I have my favorite spots to work upstairs in the stacks there, and I can get lots done because it's so wonderfully quiet. I try to work for four hours straight before coming back home, where the cats and dog and my family ensure that I won't be able to get anything else done for the rest of the day unless it's something for them.

I can understand that! What was your best moment (to date) being a writer?

Goodness! I have no idea. I couldn't narrow it down to just one moment. My favorite moments are when I'm reading through the final line-edited manuscript, and I just did that for The House of Dead Maids, which comes out next year. I'm terribly fond of that manuscript, so I had a wonderful time doing the read-through. Those were some great moments!

and it’s sequel. Was it hard to change genres?

It was hard writing for a boy. Martin isn't a thing like me, and I really had to get to know him. He made the task harder because he doesn't know himself well at all. As I wrote, I would have to observe him carefully and notice trends in his behavior. Then I'd piece the evidence together and say, "Aha! That's why he listens at doorways: he's terribly bad at handling new information, he doesn't make good guesses about surprises, and he always seems to need time to digest what's happened." I could figure that out by watching him as I wrote, but he wasn't going to think it or tell me--he didn't know those sorts of things about himself.

Changing genres ... well, did I really? I suppose so, but The Sky Inside

and The Walls Have Eyes

are science fiction for kids who don't like science fiction. The books don't feel very technical to me, and that means the science feels a little bit like magic to me, which is what I write about all the time.

Any new projects you’re working on that you can tell us about? 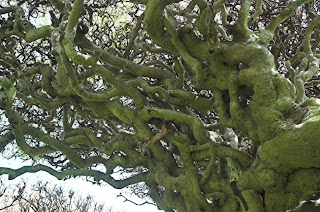 I can't wait till The House of Dead Maids comes out next fall (2010). That's a project I've been excited about for some time. It's a prequel to Emily Bronte's Wuthering Heights (imagine the umlaut, please, because my computer won't supply it). In that story, the girl who will later become the housekeeper for the Brontes encounters the boy who will later become Heathcliff. I brought that project back to my favorite editor, Reka Simonsen at Holt for whom I wrote the trilogy, and it was wonderful working with her on it.

The other project in the works is a co-written memoir of my daughter Elena's life with anorexia, tentatively titled Skeleton Girl. That's been awful to write, but I think Elena has some amazing insights into the illness that will help other teens and teens' families. We're half finished with the rough draft, but it's been so painful to work on that I'm taking a break for a few weeks to work on my Bronte webpages, which I'm creating now before I forget all the research I did to write the manuscript.

Can't wait to see the new books. Thanks so much for stopping by! It was a pleasure to have you.

Clare B. Dunkle is also the offer of the Hollow Kingdom Trilogy, By These Ten Bones

(a werewolf story BEFORE Twilight was popular), The Sky Inside

, and its newly released sequel, The Walls Have Eyes

. If you'd like to learn more about Clare (including lots and lots of photos of her life in Europe), visit her at her website.
Posted by Alyssa F at 10:24 AM

Help! All these great author interviews have my Amazon cart at over $200 and it's only halfway through the month! I'm both anxious to see what's next but also wondering how strong I'll be to resist all these yummy books. Keep it up!!!

Well, I guess maybe you'll have to space some of the orders out. :-)

Anom--that's why I take advantage of amazon's 4 for 3 deal as often as freaking possible. It really cuts down (though I tend to then just keep adding books XD).

I'm looking forward to reading the Hollow Kingdom, I've been waiting on book 3 (cause my sister had it) and shall now enjoy it as a whole :)

Wonderful, insightful, interesting interview! Yes, it really does deserve all of those adjectives. Those questions are great, and Ms. Dunkle provides some great answers. I want to move to Europe now! :-) Great post!