Review: Inside the Walls of Troy 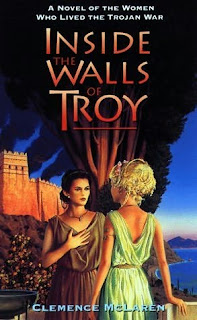 Inside the Walls of Troy: A Novel of the Women Who Lived the Trojan War

Most of us know the story of Helen of Troy and how she was “The Face that Launched a Thousand Ships,” consequently starting the Trojan War. This book tells the story of the great battle between the Greeks and Trojans as never before. Helen tells us of her childhood (she was kidnapped at age 12) and the events leading up to her marriage. She also explains why she left with the Trojan prince Paris when she was already married, leaving behind both her husband and her daughter (who happens to be named Hermione). Then the book changes focus to Cassandra’s story, Trojan princess and Paris’ sister. Cassandra has the gift of Sight and sees immediately that Helen will bring tragedy to Troy. But she cannot help being drawn to the beautiful woman. At the start of the War, both women must learn how to support each other, or risk not surviving the terrible years ahead.

I thought this was a pretty good book. It was very interesting to see the Trojan war told from a women’s point of view, since they were so secluded from regular society in ancient Greece. The story of Helen’s childhood was also fun to read, since it is usually overlooked (if nonexistent) in most Greek mythology. The writing is fairly simple and uses a lot of dialogue to help pull the story along. A good short read, recommended for reluctant readers or someone who loves to read about Greek mythology.