Review: Walk Softly and Watch Out for Bigfoot 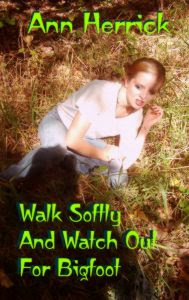 Walk Softly and Watch Out for Bigfoot

I covered my face with my hands. There was a crash through the underbrush. Then…silence…

“Are you okay?” Neeta asked. “That deer really startled you.”

Gwynne is a city girl through and through. Born and raised in New York City, she has the perfect summer plans to finally get her on the school A-list. With aerobics classes, personnel makeovers, and shopping sprees, nothing can stop Gwynne from becoming popular.
That is, until her parents drop the bomb.

Rather than spending a few weeks in LA while her parents spend their second honeymoon in Europe, Gwynne is being shipped of to a small Oregon town called Adler to visit her cousin Neeta. Gwynne, naturally, is shocked beyond compare. What is there in Oregon besides trees anyway? Is she doomed to spend her summer vacation trapped amongst tree-huggers?
At first, Gwynne’s worst fears seem to be confirmed. Rather than being interested in boys and makeup, all her cousin seems concerned about is saving some old forest from becoming a resort. Slowly Gwynne becomes accustomed to the small town life, and even agrees to go on a camping trip.

Camping turns out to be harder than she expected. No showers, no electricity, wild animals, and Bigfoot? No thank you! But when Gwynne learns to focus on other instead of herself, she ends up finding a treasure she never could have imagined.
Walk Softly and Watch Out for Bigfoot is a fun and quick read. For those of you city-dwellers who’ve ever imagined life away from all the hustle and bustle, the book offers a great look at what life in a rural town offers. Filled with plenty of humor, drama, and culture clashes, readers will also be surprised to find lots of facts about taking care of the environment. Recommended for readers 12 and up, especially those looking for a wilderness adventure.
Shady Glade Rating: 8/10


*Please note* This was originally posted off-site. Clicking on the below link will take you to the full body of my reviews found at www.yabookscentral.com
Click here to read the original review.
Posted by Alyssa F at 4:33 PM