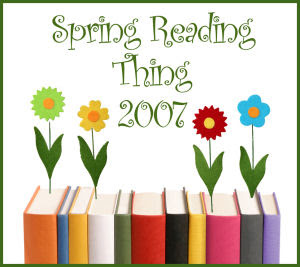 I’ve accepted the challenge from Callapidder Days for the Spring Reading Thing 2007 event. If you’re interested, you can head over there and join yourself. As usual, I’m late finding things out, and the challenge started on March 21st. But that’s okay, because I’ve simply added what I’ve started reading since then. :-) So here’s my list of what I’m going read before June 21st. We’ll see how well this goes, and you can expect reviews from most of these too. It’s almost 12,000 pages of reading… think I’m up to the challenge?

by Madeline L’Engle
Before the Storm (Star Wars: The Black Fleet Crisis, Book 1)

by Michael P. Kube-Mcdowell
The Phantom of the Opera: The Original Novel

by Gaston Leroux
The Secret Life of Bees

by Marathon Team
Travels of Thelonious (Fog Mound, the)

by Susan Schade and Jon Buller

Series Books
Among the Betrayed

by Lynne Ewing
Night Shade (Daughters of the Moon #3)

by Lynne Ewing
Secret Scroll (Daughters of the Moon #4)

by Kristiana Gregory
Barbarian (Sons of the Dark #1)

Everything Else
A Matter of Profit

by Carole Wilkinson
The Frog Princess

by Joan Elizabeth Goodman
The Legend of Lady Ilena

by Patricia Malone
Lost: A Novel

by Cathy Hopkins
May Bird and the Ever After

by Faiz Kermani
My Lady, Pocahontas

by Kathleen V. Kudlinski
Mystery Stories by Various
Sword of the Rightful King: A Novel of King Arthur

by Emily Rodda
Tales from the Secret Annex

Okay, I just have to say...wow. Huge list, tons of variety! Thanks for being part of the Spring Reading Thing. Enjoy ALL those books! :)

Thanks! Hopefully I'll be able to catch up on everything. :-)