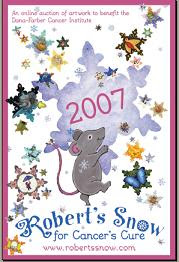 It’s snowing once more at the Shady Glade. This week is going to have two features here, so make sure you check it out. I know this is old news, but some people still haven’t heard of Robert’s Snow. If you’ve read this before, skip down to see today’s snowflake.

And here’s Carol Heyer’s 2007 snowflake: “Merry Christmouse” (Click on the picture for details) 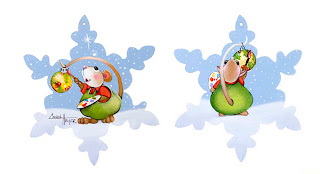 Isn’t it adorable? I just love the inventive way the mouse has chosen to paint his ornament. The snowflake will be auctioned off in the second set of auctions starting on November 26 at 9:00am and closing on November 30 at 5:00pm. Visit the auction site for even more details.

Carol Heyer currently lives in Thousand Oaks, CA and has worked out over 25 children’s books, and has sold over 1,500,000 copies! Her art has also appeared on many other projects, from book covers to bookmarks. She’s won several awards including honors from The Society of Children's Book Writers and Illustrators and The Society of Illustrators LA. Although she works in a variety of genre’s her favorite is fantasy (someone after my own heart!).

Carol’s newest work is a picture book just released this fall called Humphrey's First Christmas. This story follow Humphrey the camel’s first journey to Bethlehem, and the important lesson learns about gift-giving while he is there. I’ve gotten permission to show you some of the marvelous illustrations from the new book: 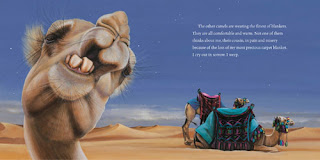 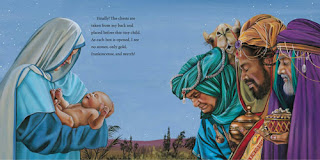 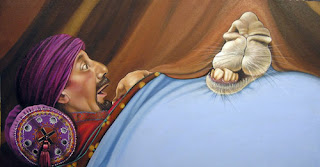 is available on Amazon.com. To learn more about Carol Heyer and see more of her stunning artwork, you can visit her at her website.

And, (to adopt someone else’s mantra) Buy Snowflakes! Fight Cancer!

Love those camel lips! Thanks for highlighting this one...

Yeah, that's one striking perspective on the camel in that first illustration. I love the snowflakes with two-sided illustrations that really deliver.

Thanks for this feature, Alyssa!