New month, new comment contest. I'm catching up on this and Contest Monday rather than posting a contest roundup this week. But you can always check the sidebar for more ways to win. Comments made since July 1st will count toward this contest, even though this isn't being posted until the 6th. The winner of June's contest will be announced tomorrow.

How to enter: Each comment you leave on this blog equals one entry into the pot. These must be genuine comments, and other contest entries won't count for this contest. By genuine comment I mean it must add something to the conversation taking place. In other words a comment that says simply "cool" or "please enter me" will not help you win this book. Your fate is in your own hands. The more you comment, the better chance you have at winning. At the end of the month I randomly pick one winner for the prize. It's that easy. 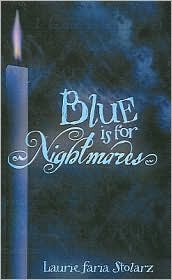 Want to know what your playing for? July's prize is a brand new, paperback, signed copy of Blue is for Nightmares

by Laurie Faria Stolarz. To win it, comment away until July 31st at midnight PST. The randomly selected winner will be announced early in August. Good luck to everyone!

About the Book (from back cover): "Stacey's junior year at boarding school isn't easy. She's not the most popular girl at school, or the smartest, or the prettiest. She's got a crush on her best friend's boyfriend, and an even darker secret that threatens to ruin her friendships for good.

And now she's having nightmares again again. Not just any nightmares--these dreams are too real to ignore, like she did three years ago. The last time she ignored them, a little girl died. This time they're about Drea, her best friend who's become the target of a seriously psycho stalker.

It started with weird e-mails and freaky phone calls. Now someone's leaving Drea white lilies--the same death lilies that have been showing up in Stacey's dreams. Everybody thinks it's just a twisted game...until another girl at school is brutally murdered.

There are no witnesses. Worst of all, no one has a perfect alibi. With everyone as a potential suspect, Stacey turns to the one secret weapon she can trust--the folk magic taught to her by her grandmother. Will Stacey's magic be strong enough to expose the true killer, or will the killer make her darkest nightmares come true?"
Posted by Alyssa F at 9:49 AM

Ooh, a new month, a new comment contest - sweet! I really like the cover (okay, so maybe I'm biased because blue is one of my favourite colours, but still), the candle looks super cool.

Oh, I've been wanting to read one of these for a while. I first heard of them in the 7th grade and four years later I still can't remember to ask my friend if I can borrow one of hers. Thanks for the chance to win it =)

Oooh, this sounds good! This is the kind of book that got me hooked on creepy stories when I was a kid. Great choice!

(My word verification at the bottom of your page is: "noparkin" That's cool!)

I have never heard of Blue is for Nightamres, but I love books like this... I would love to be entered into this giveaway. I love thrillers about crazy people, "real dreams", and murder..

I keep thinking about buying this book but I keep reading some funky reviews about. Doesn't mean I don't want to check it out for myself...This is my chance!

This sounds really good - I like the cover, but I like the dark undertones the description has. Gotta love a character who's in love with her best friend's boyfriend!

Sounds interesting. Count me in:)

Interesting novel, I am a subscriber and would like to win this book. Thanks for the giveaway.

Sounds creepy...Love the cover though!

I've been wanting to read this book for a while now! It sounds super creepy. Count me in :)

Nightmares seem to be my specialty. Please enter me in this drawing. Thanks! Indigo