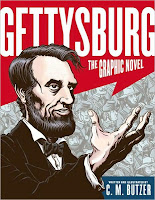 This is one of those books that’s kind of hard to summarize. Despite the title Gettysburg: The Graphic Novel, only half of the book is dedicated to the enormous and bloody battle that consisted of three days of fighting. The majority of the book looks at the aftermath of the fighting and the dedication of the battleground. Of course, you can’t really talk about Gettysburg without talking about Lincoln’s Gettysburg address. Each line of that famous speech is illustrated with its own picture, which of course takes up half the book by itself.

I do want to mention that although this book is really marketed towards younger readers, I would hand it over to them with some caution. Kids who don’t understand about war/death may find this art in this book disturbing, since it does show some of the fighting and battlefields both during and after the battle was over.

That being said, it’s also impossible to talk about graphic novels without bringing up the art. I’m not really a fan of monochromatic art (if you’re going to do a graphic novel in color, shouldn’t it have more than one color?), but I think the blue-toned artwork is appropriate for the subject. There isn’t anything particularly outstanding about the art either, (Lincoln kind of scared me) although it certainly wasn’t bad.

Overall, this is great book for those who’d like to learn a little bit about the Battle of Gettysburg and have a hard time digesting boring history books. The cast of characters and author’s notes will help guide readers through the battle enough to get them to separate fact from fiction. This isn’t going to give you an in-depth account by any means, but some knowledge can be gleaned from the content for sure. Really, this is more of a tribute to the monument of Gettysburg, as opposed to the actual battle, so despite being a book about war it ends on a relatively hopeful note.

If you'd like to win a copy of this book, enter the Contest Monday giveaway before July 13th.
Posted by Alyssa F at 5:40 PM

These seems like a cool idea to try to get kids (especially boys maybe) into reading about history. Thanks for the review.

jfs- I know, I'm so behind on reviews! I'm trying to get more written, so hopefully I'll have more to come in the next few days.

Hi, I am a new subscriber and enjoy reading historic novel, count me in on this giveway.