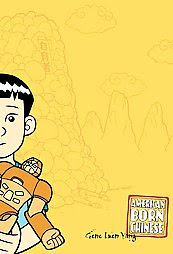 by Gene Luen Yang
An ancient Chinese hero, the Monkey King, wishes to lose his animal status and become revered as one of the Gods. An Asian American middle school student named Jin Wang struggles to become like his white classmates. All-American student Danny is plagued by the visit of his cousin Chin-Kee (a culmination of every negative Chinese stereotype possible) that he has to change schools yearly because of embarrassment.
At first, these three storylines seem to have nothing in common. However, American Born Chinese artfully develops each storyline, bringing all three to a satisfying and blended conclusion by the end of the book. Whether readers appeal to Jin’s struggles to fit in, or the almost sit-com-like situations of Danny’s life, everyone is bound to find something to relate to. I was even surprised by the blended ending, which I can assure you is not something that happens often! The art is clear and crisp, and presented in full-color, an interesting contrast to most of today’s graphic novels. A wonderful read, so don’t pass this one up just because you are wary of graphic novels!
Shady Glade Rating: 8/10

I am looking forward to reading this book!