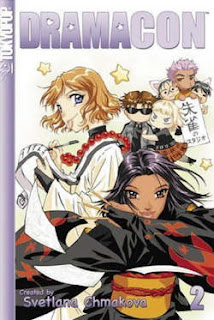 I happened upon the world of Dramacon as a member of the Cybils nominating committee. If nothing else, this book was definitely worth the job! I must admit that so far I haven’t had the opportunity to read Volume one, but after this amazing book, nothing is going to stop me from getting my hands on it eventually.

Dramacon continues the story of Christy, amateur comic book writer as she enters her second year of the yearly anime convention. Much of Christy’s life has changed in the past year, including the addition of a new artist, Bethany, for her growing comic. In addition to some new faces, Christy also reunites with old flame Matt... who has brought his girlfriend. Christy isn’t sure what to do, but never fear. This is one convention that never gets boring.

This was definitely on my shortlist for the Cybils, and the rest of the nominating committee agree with me. Despite the fact that the book mostly centers on characterization as opposed to plot, it was extremely engaging and very hard to put down. Filled with great characters, humorous situations, and pun references to pop culture, this book was excellent. Pick this one up, you won’t disappointed. (but I suggest you read Volume 1 first… it makes more sense that way.)