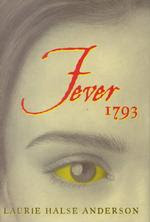 Mattie Cook is bored with her life in Philadelphia during the hot summer of 1793. Working with her widowed mother and grandfather in her mother’s coffee shop, headstrong Mattie is convinced that nothing excited will every happen to her. But in August, Mattie gets the excitement she’s been dying for.

A illness, known as the yellow fever, has begun to spread in Philadelphia. Slowly the fever takes hold, until the entire city is affected. The rich flee for the countryside, leaving the town full of looters, sick patients, and corpses. This is the excitement Mattie’s been hoping for, but can she escape the fever with her family and her life? Read about the 1793 Yellow Fever Epidemic (an event that killed 10% of Philadelphia’s population in 10 months) through the eyes of girl who’s at the center of it all.

Most famous for her books Speak, Catalyst, and Prom, I believe this story is a gem in Laurie Halse Anderson’s work that often gets overlooked. This is such a shame too, since it is a truly wonderful book. Anderson spins a mesmerizing and engaging tale about the yellow fever epidemic, a historical event I didn’t even know about until I read this. Readers will be on pins and needles until the very end. After all, getting the fever is a death sentence… or is it?