To make up for my lack of promised Halloween reviews in the past two days, I'm going to do something a little different today. Those of you who are long time followers will know that I occasionally review books that aren’t YA, including picture books. Even though these are published for kids, not only kids can enjoy them. So I wanted to review some Halloween picture books I’ve come across lately. The problem is, there’s not really that much you can say plot-wise about a picture book. So rather than doing a review for each, I’m going to do several mini-reviews. So here we go. 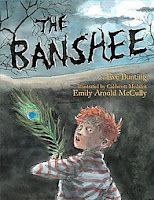 I actually picked this one up as a gig for a local newspaper I do reviews for. It sounded like a perfect Halloween story. It's about a little boy in Ireland (can't remember his name off the top of my head) who thinks he hears a banshee outside of his house. For those of you who aren’t versed in the supernatural, the banshee of Irish legend is a ghostly woman who is said to wail outside a house where there is an impending death. Naturally, this scares the boy silly because if it IS a banshee, then who at his house is going to die. In the end, it's a cute story about facing your fears. Not really my thing. The one thing that redeems the book is the illustrations. They are dark and murky, which perfectly complements the tone of the story. Overall, this is a great story for the subject matter: a banshee. Beyond that scope it's less than satisfying. 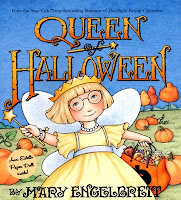 This book is the Halloween installment of Mary Engelbreit's Ann Estelle series. This time Ann Estelle is all dressed up in the perfect fairy queen costume and is ready to get lots of candy. She learns a lot about bravery when she works up the courage to make her way up to ring the doorbell of the creepiest house on the block. But if you’re familiar with Mary Engelbreit you'll know that it really isn't that creepy. Not my favorite Ann Estelle story, but it was cute and I always love Mary's illustrations. Plus, this one comes with a Ann Estelle paper doll, which definitely gave it bonus points in my book. 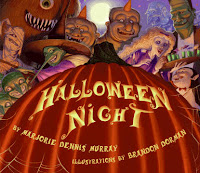 This is essentially the Halloween equivalent of The Night Before Christmas. It’s written in rhyming text and features a whole bunch of monsters, witches, vampires, etc. getting their house ready for this big Halloween celebration. But the guest of honor (10 trick or treaters) run away screaming when they see the house. So everybody parties without them. It’s a cute book, and although it isn’t an original concept, the art was interesting. A great book for young kids who are eagerly anticipating the Halloween holiday. I could see this becoming an October tradition for some families. 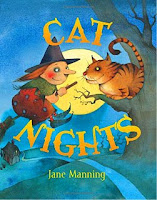 This is one of my favorite books of the bunch, just because it’s so original. Now although the main character is a witch, this is easily a book that could be enjoyed year-round because it’s not necessarily “Halloween” in nature. The story centers around the witch Felicity who is so excited to reach her 263rd birthday. Why? Because on this special birthday a witch is finally granted the power to turn into a cat for the night. Felicity loves being a cat, but her witch cousins are worried that Felicity might decide to use the spell one too many times. (You can spend 8 nights as a cat, but the 9th time you stay a cat). The three cousins attempt to intervene with some interesting results. In the end it’s a really cute story about learning to be true to yourself. Reading this made me want to turn into a cat too. Just for one night though.

by Jerry Seinfeld and James Bennett 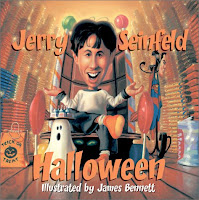 And last, but certainly not least is one of my favorite Halloween books of all time. Don’t be fooled by the simple title, or the fact that this is a picture book. I can confidently say that this a book adults can enjoy just as much as kids. It reads just like one of Jerry Seinfeld’s comedy acts. Jerry takes us through the childhood experiences of Halloween, including the ultimate quest for good trick-or-treat candy to what happens when that store bought superhero costume isn’t as great as you thought it would be. Kids will certainly relate to the situations here, and adults can chuckle as Jerry’s hijinks bring up memories of their own Halloween mishaps. Combine this story with illustrations that perfectly complement the writing, and you’ve got a real winner. Seriously. You need to check this one out.

And there you have it! I hope you found some books to dive into this Halloween. And if you don’t normally read picture books, that’s okay too. You are never too old for a good picture book.

Copy provided by the publisher for Queen of Halloween, Cat Nights, and Halloween Night
Posted by Alyssa F at 7:16 PM

I'm with you on picture books not necessarily being for kids. I've purchased at least two in the last 12 months! Great little mini-reviews (and thanks for the images). :)

Love this! Many of these books were included in my library display this month :)

Great books. I can't remember the last time I read a picture book.

Oooh, oooh, I am making a list for my babies. Thanks

Great idea! Picture books can be hard to review but I LOVE these! Halloween is the best anyway but in pictures it's awesome!!