Review: A Practical Guide to Vampires 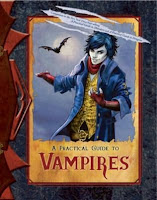 A Practical Guide to Vampires

So before those of you who are Twilight fans get super excited, you should know this: no sparkly vampires in this book. Instead, this is filled with the traditional Dracula-type vampires. Those who suck your blood, turn into bats, use mind control, burn in the sun, and can usually be killed with a wooden stake to the heart.

As its name suggests, A Practical Guide to Vampires is written as an all about vampires kind of book, with an emphasis for those who are aspiring vampire hunters. It covers vampires basics, vampire haunts and social structure, vampire magic, vampire allies, you get the idea. Apparently this is part of a series of other guides, but I haven’t read any of those so I don’t know how they compare.

The book is interesting, although the writing is nothing to be raved about. The thing that really makes this book is the design. It feels like a guide in the way it’s organized, formatted, the handwritten notes in the margins, even down to the yellowed paper it’s printed on. Not as great as the "ology" books, but very, very close. And the illustrations are fantastic! That alone makes the book worth picking up.

My one complaint was the setting. As soon as it starts mentioning magic you know it’s meant to be a fantasy world, but yet it’s written as though talking to a modern reader. To me it felt like the book couldn’t decide between being a real-live modern “actual” practical guide or a “this would be useful if this sort of thing actually exists” guide. Not even sure if that explanation makes sense to anyone other than me. This bugged me, but it was such a small thing I doubt most people would notice.

Overall, an interesting read, especially if you’re into vampires. Great for Halloween, certainly. And check out the illustrations!

If you’d like your own copy of A Practical Guide to Vampires, remember every comment you make this month gets you closer to winning it in the Comment Contest for October.
Posted by Alyssa F at 3:45 PM

Hi Alyssa :)
Thanks for the thoughtful review.
All the best,
RKCharron
xoxo

This sounds really interesting! No sparkling vampires? It gets bonus marks. Great review!