This is one of those book reviews where I actually read this book a while ago, and have been meaning to post a review for some time. Well, I finally got around to it now! 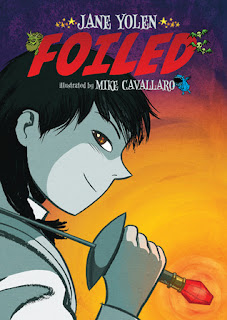 Aliera eats, sleeps, and drinks fencing. Not very popular at school, and with not a lot of friends, she spends most of her free time working on her fencing technique. And it helps that she’s good. Very good. Little does she know that her life is about to change when she gets assigned a new lab partner in science class. Chris is engaging, funny, and maybe a little bit mischievous (and mysterious). He brings a little bit of levity and excitement to Aliera’s life, and fencing just might start to slip out of first place in her book. When she aquires a new practice fencing foil with a red jeweled handle, Aliera’s fencing skills are about to take center stage, and she just might get more new excitement than she bargained for.

I’m going to be honest: Foiled really disappointed me at first. I’m hoping it was because I had such high expectations going into it, since it was not only a graphic novel, but one done by one of my favorite authors, Jane Yolen.

First of all, the artwork wasn’t my favorite. Eh. But I can get over that. Artistic license and all that. But one of the most disappointing things was that for a graphic novel that was published in full color, there was not a lot of color to go around. Mostly shades of gray, dark blue/purple, you get the idea. Granted, the end of the book reveals a very good reason why this is. So in retrospect, I understand why that chose was made, and I admire them making that choice. But in my initial reading of the book, the whole thing came off as “blah” to me.

Second of all, it doesn’t seem like much happens plot-wise until the last third or so. I realize to some extent there’s a certain amount of necessary background information that needs to be presented. In a graphic novel that’s show sort, where every panel is carefully planned to impart the maximum information to the reader, I found the amount of what felt like background a little overkill. I got a sick of all the fencing, Aliera at school with Chris, more fencing, Aliera hanging out with her cousin, more fencing… you get the idea. And once all the action does show up (in that final third) the resolution is rather abrupt. Kind of like “okay, here we go… and we’re done!”. Everything does turn out to be significant in the end, but I feel like there should have been more to keep me engaged as I went along, so I could pay a little more attention to those things while I was reading.

In the end, it’s a much better read the second time around. Knowing how it ends up, you do see more connections than the first time. And I think the book ended up being stronger than I originally thought. I see there’s been a sequel published since I first read this (Curses! Foiled Again), and I have high hopes for that second book. There’s a lot of questions and loose ends to be wrapped up, which I imagine would be just right for a sequel. In the end, Foiled isn’t a bad book, and despite my initial disappointment, I would still recommend it, especially to Jane Yolen fans. Maybe if you don’t have as high of hopes for it as I do, you’ll enjoy it more the first time than I did.


Available at Amazon.com in Paperback
Add to your Goodreads shelf
Check availability on Paperbackswap.com
Posted by Alyssa F at 5:41 PM