Review: A World Without Heroes (Beyonders)

Yup, it's another review!  I'm on a roll lately.  :)  I've been able to  write up several of these in free moments over the last little while, so hopefully it will keep me supplied for a few weeks. 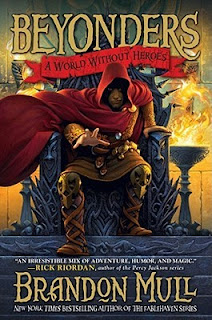 Beyonders: A World Without Heroes by Brandon Mull

Jason feels like he’s in a rut. Although his real passion is baseball and animals, he feels like he will have to live up to his parents’ expectation of him becoming a dentist. Why? Because his dad is a dentist, and both of his older siblings are on their way to becoming dentists as well. It seems to be a blossoming family tradition. Jason’s one escape, other than baseball practice, is his volunteer job working at the local zoo. Which is about to get a lot more interesting, as one day while working near the hippo tank he ends up falling in and getting swallowed whole. But rather than being eaten alive, the hippo leads him to an alternate world: Lyrian.

Here Jason is a “Beyonder”: someone from the world beyond this strange place he has found himself in. Lyrian is ruled over by the evil Emperor Maldor; who happens to have outlawed anything to do with the Beyond. Through a “curiosity killed the cat” moment, Jason ends up engaged on a quest to find a Word of Power that will destroy Maldor and hopefully save Lyrian. The problem? The Word has a total of six syllables, which have been scattered and hidden all over Lyrian. With the help of another Beyonder named Rachel, Jason must quickly gather all the syllables of the Word, or he might not make it home alive.

I’m a big fan of Brandon Mull’s. I loved his Fablehaven books, the Candy Shop War books are also a lot of fun, and I even got to meet him one on one once. So I definitely have a soft spot for him. So when I first heard about the Beyonders series, and that it was one he had been working on for many years, I was pretty excited.

A World Without Heroes is a book that is both alike and different from Brandon Mull’s other books. Like the Fablehaven books, this features both a male and female main character, with Jason definitely taking the larger role. Although that feature does seem to change nearer the end of the book and I expect it will continue shifting in future books. The supporting cast of characters is quite large, to the point where it was almost a little difficult to pick up on characters that were mentioned once or twice in the beginning when they pop up again in the plot later.

The plot itself is full of twists and turns. Although not much seems to happen to Jason and Rachel at first, I was certainly never bored as a reader, or felt I was being plagued with introductory material. There is a chapter of the necessary background information, but the action gets going pretty quickly, within the first chapter. One of the things that caught my attention when watching the Star Wars movies for the first time (way back in elementary school) was that in addition to a great story, if you pay attention there’s also some political/intrigue subplots taking place. I felt like this book was a lot the same. Jason is on a quest to find the Word, but there’s a lot of political reasons he comes up against the things he does, which add a whole new layer to things when you start paying attention.

The world building of this book is intriguing. Lyrian definitely has a medieval/feudal feel to it, which is typical of epic fantasy. However, there’s something weirdly alien as well as that familiar fantasy feel. The description of foreign foods/fruits, strange musical instruments, and inventive architecture (such as a tavern that rotates like a merry go round) add plenty of strange to what you would expect from this setting. There’s even the addition of the “wizard born” races that add a dimension to the populace of Lyrian. These are all magically created races, but are quite human in appearance and action, but have special features such as being able to separate from your body, or being reborn after you die thanks to a seed that grows on your neck. Yeah, I know, that sounds really weird, but you should just go with it, okay? Cuz it’s awesome.

As a general warning, this book does have a pretty decent cliffhanger ending, so you will definitely want to have the next one (Seeds of Rebellion) on hand when you finish this one. Overall, I think this is a strong start to a great trilogy.

Available at Amazon.com in Hardcover, Paperback or Kindle
Add to your Goodreads shelf
Check availability on Paperbackswap.com
Posted by Alyssa F at 6:30 PM