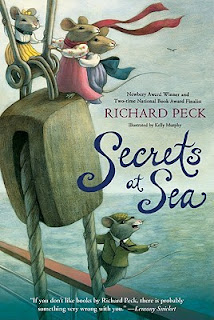 Secrets at Sea by Richard Peck

Helena is the oldest mouse, and since her mother, father, and two older sisters have since passed on (it’s a dangerous life being a mouse!) she has the responsibility of worrying about and taking care of her two younger sisters, Louise and Beatrice, and younger brother, Lamont. So when the Upstairs Cranstons decide to leave their home and take of tour of Europe in order to give their eldest daughter Olive “her chance” (to catch a husband), Helena decides that rather than face and empty house and starvation, the Downstairs Cranstons will just have accompany their humans across the ocean. Even though mice aren’t good with water. The resulting voyage is full of strange new experiences, intrigues, dangerous situations (cats!), brushes with royalty, and maybe even a little romance.

I have to say, I’ve almost never met a Richard Peck book I didn’t like. In fact, I can only think of 2 that I didn’t enjoy thoroughly, and they were both fine books, just not for me. And that’s okay. Luckily, Secrets at Sea can easily fit the category of “thoroughly enjoyed”.

I suppose it bears mentioning that the whole book itself is quite silly. This is definitely a “suspension of disbelief” book. However, I think for the middle grade audience it’s aiming for, this isn’t necessarily a problem. As a (young) adult reading this book, I personally didn’t have any problem with it. But I’m pretty gullible that way. I’ve seen reviews that have beaten this one up a bit for this very reason, because it seems little too unlikely and the plot is fairly simplistic. But I think if you go into expecting it to be silly, you won’t have a problem with it. So the moral of the story is: don’t take your reading too seriously!

The book is narrated by Helena, and as the oldest, she does come off as bossy quite a bit. However, being the oldest (and pretty bossy) myself, I found myself relating to Helena quite a lot. She’s simply concerned with how she can keep her dwindling family together, which is something I’ve worried about myself before. So although some might find her unlikeable, I enjoyed Helena quite a bit.

The other nice thing about this book is that I think it has appeal for a wide audience. Yes, it has some romance (think along the lines of “we love each other and now we’re getting married!”), but not enough to necessarily turn off the young male reader. It is historical fiction, but isn’t heavy enough in historical detail to turn off readers who shy away from history. And I think it is a book that all ages can enjoy, especially its target middle grade audience.

I really did enjoy Secrets at Sea, it was a short, quick read, and I am still putting Richard Peck at the top of my favorite authors list. According to Goodreads it appears he has another mouse book that’s been recently published, The Mouse with the Question Mark Tail, which I will have to pick up and try soon.

Available at Amazon.com in Hardcover, Paperback, or Kindle
Add to your Goodreads shelf
Check availability on Paperbackswap.com
Posted by Alyssa F at 8:58 PM

We've read quite a few books by Mr. Peck as well. Sounds like a fun book though. Thanks for the review.