What I've Been Up To

In addition to having lots of work and family issues to deal with, there's another thing that's been keeping me away from the blog. It's called the Cybils. Pretty much every night that I'm not working or have another commitment has been spent reading nomniees (and working on my bookshelf). And while I do still have about a month to get through as many of the books as I can, take a look at my to be read pile: 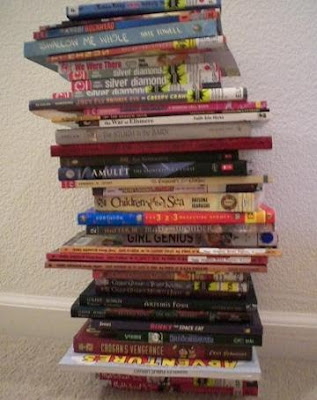 Now, I took this two days ago, so six of these I finished over the holiday, so it's a little out of date. But you get the idea. Good thing those are graphic novels and read fast! And I've already read 23 nomninees including six books that come before in a series so I can understand what's going on. Phew!

Anyway, if you don't hear from me in the next few days, at least you'll know what I've been doing. I feel bad for neglecting my blog but I just don't have enough time in the day lately. Le sigh.

I did also want to point out the new Cybils widget in the sidebar. It's over to the right -----> It displays a new book from one of the nominated categories each time it's refreshed. Neat huh? Normally I say that any of those books would make good Christmas presents, but the truth is there are always a few books in the nominated bunch that just wouldn't make the Christmas cut. Then again, some of those books are absolutely excellent. So it's your decision, I guess.

Anyway, I'm off to go read a few more books before I have to go to work.
Posted by Alyssa F at 8:51 AM

That stack is menacing. You are brave. Good luck!

That is one impressive stack of fun! Good luck!

Good Luck (:
Your going to be super busy!

wow...that is a giant stack of books. Good luck!