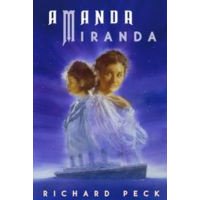 Mary Cooke has been trained to be a servant her whole life. With a mother who was a former maid to one of the wealthiest people in England, and no dowry for marriage, she has no other expectation in life than to serve her superiors faithfully. On a spring day in 1911, Mary finds herself traveling to the place where she believes she will spend the rest of her life.

When her wagon breaks down en route, Mary wanders along the seaside until she finds herself visiting an old Wisewoman. Over afternoon tea, Mary tells the Wisewoman that she believes her new life will be boring and uneventful. The woman suprises Mary by telling her she can see the future and proceeds to give Mary a glimpse of her future life. She tells Mary she will not only marry twice but die and live again beyond a mountain of ice. Although she is puzzled by the strange prophecy, Mary pushes the words to the back of her mind as she arrives at last at Whitwell Hall.

Once there she soon becomes the new maid of Amanda Whitwell: the spoiled, selfish daughter of Lady Eleanor Whitwell, mistress of the estate. Soon “Miranda” (as her mistress renames her), settles in to life at the Hall. The only strange thing about her new job is that Miranda looks like Amanda Whitwell’s near-double.

Soon the conniving Amanda decides to use the coincidence to her advantage. While she courts both men Miranda loves, Miranda waits dutifully by Amanda’s side, easily manipulated by her mistress’ plans. When maid and mistress are to journey to America for Amanda’s wedding, Miranda finally snaps. As both women step onto the deck of the Titanic, little do they know that their lives will change forever…

This book had everything I needed to keep me interested. With plenty of suspense, great characters, and an interesting plot, it was one of those books you hope will never end. Miranda’s lovable personality will keep readers rooting for her to get the best of her arrogant mistress. Best of all, the book offers a look at the servant’s view of Edwardian English society rather than the glamorous wealthy lifestyle that is usually portrayed.

Originally published as an adult novel, Amanda/Miranda has recently been abridged by the author into this Young Adult version. Unlike most books that involve characters who travel on the Titanic, this book does not center around the tragedy, but rather around the people involved. The book does not simply end after April 14, 1912 but continues on for several years. I can’t tell you why it doesn’t end or I will give it away so you’ll just have to read it yourself.

Recommended for readers 12 and up, although older readers will probably understand the situations presented better. Those who enjoy reading stories involving the Titanic will not be disappointed, even though the story does not revolve around the incident. Don’t miss out on this wonderful historical fiction read!

*Please note* This was originally posted off-site. Clicking on the below link will take you to the full body of my reviews found at www.yabookscentral.com