Review: Wren to the Rescue 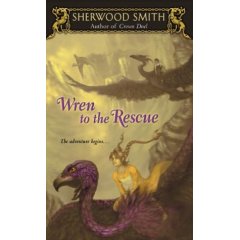 Wren to the Rescue

Wren has lived her entire life in a boring orphanage. Expecting nothing more than to work hard her entire life, she is shocked to learn her best friend Tess is really Princess Teressa of a neighboring kingdom. Tess's parents hid her in the orphanage to keep her safe from the evil King Andreus who wants nothing more than to get his hands on the princess. But now that she’s old enough Tess’ parents are finally letting her come home, and she's taking Wren with her!

Two days later Tess is kidnapped by Andreus, an act that nearly causes a civil war in the neighboring kingdoms. Wren is determined to find her friend, even if it means she has to go alone. She soon meets up with a novice magician and a young prince who agree to accompany her on the dangerous trip across the mountains to Andreus's kingdom. The journey is not easy, and Wren must deal with all sorts of magic spells, evil creatures, and even being turned into a dog. All the while she gets closer to her friend, but can she make it in time?

Smith wrote this book (and the two that come after it) for a younger audience than her Court Duel series. Although the story was at points very obviously written for children, overall it is still a good book. It starts off a little slow, and family relations between royal families can be a bit confusing because many are never fully explained. After the first few chapters I got involved enough to not want to put it down and I finished it fairly quickly. Several points are not fully tied up, leaving room for the two sequels. Tess's character remained somewhat flat so I'm hoping that she might play a bigger role in the next two. Overall the plot and the exploration of Wren's character were very intriguing. A good light read for both young and older readers.

I actually haven't read Court Duel yet, but I just ordered a copy of it, so hopefully I'll be able to soon!