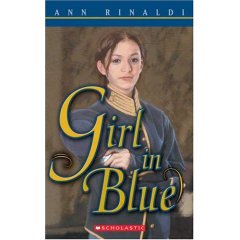 16-year-old Sarah has caught the war fever of 1861. Determined to join the Union army, she runs away from her Michigan home escaping a marriage arranged by her abusive father in the process. After a haircut and a change of clothes, she is enrolled in the 2nd Michigan infantry under the name “Neddy Compton” and on her way to Washington D.C.

This is just the beginning of Sarah’s adventures. She becomes an assistant in the camp’s hospital, goes to battle and shoots her first rebel, and explores the capital city. Eventually her true identity is discovered, but even this is not the end of Sarah’s story. Becoming a spy for Pinkerton’s agency, she gets a job as a maid in the house of a Confederate socialite living in Washington. Sarah must find out how her new mistress smuggles messages to the Rebel troops; and how to keep her job.

This book is one of Rinaldi’s best. Although it is longer than most of her novels, there is more than enough action to keep readers interested throughout the story. There are several places where it appears as though Sarah’s story will end (like when she is discharged from the army) only to find out there is a significant number of pages left to the book. Sarah’s character is full of personality making her a heroine of her time; from her refusal to marry a man twice her age to her hardiness in helping with wounded soldiers in the hospital. The plot moves at a good pace, pulling readers through to the end. A good book for readers 12 and up, especially for those who are interested in the Civil War period.