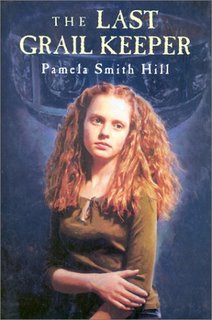 At first Felicity is annoyed at being dragged to England to with her mom who’s working on a excavation of a ancient English site. What could possibly be interesting about digging up old pieces of pottery? But then the scientists find something extraordinary. Kept under lock-and-key, rumors are flying, and hardly anyone has seen this artifact. Could it be the Holy Grail of Arthurian legend?

Felicity is skeptical at first, but then she starts having strange dreams and seeing people who supposedly never even lived. People like Morgan le Fay, Arthur’s half sister. That’s when Felicity finds out that her destiny, and her mothers, are inseparably connected with the Grail. She's a Grail Keeper, sworn to keep the Grail from falling into the wrong hands. But Felicity is not the only one who is determined to get the grail from the scientists hands. Morgan le Fay isn't the only Arthurian character who's on Felicity's tail. Someone else will stop at nothing to get his hands on the Grail. Felicity is the only one who knows how to stop him. And its up to her to save the day….

I honestly picked up this book thinking it would be a light, easy read to keep me entertained over the long Labor Day weekend. It turned out to be sooooo much more rewarding than that. I love books about retold myths and legends and this one was a unique take on the traditional. Away from beaten path of retelling the Arthur legends, this book focuses not on the legend of the king but on the Grail and the legend behind it. Interwoven with both Medieval and modern characters, this book is sure to keep you on the edge of your seat until the very end.

I've never heard of this book, but it sounds really interesting! I'll have to look for a copy =)