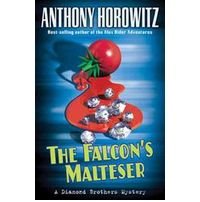 The Falcon’s Malteser marks the first book in the new Diamond Brothers Mysteries series. The story follows the life of Nick Diamond (formerly Nick Simple) and the adventures of his wacky brother. Herbert Simple has been kicked off the police force and has decided to start his own private detection agency. Renaming himself Tim Diamond, he is eager to accept his first case from a dwarf name Johnny Naples. All he has to do is baby-sit a small package Johnny shoves into his hand for a few days. How hard can it be?

Nick and Tim soon learn just how hard. The next day, Naples is dead and Nick has to use his own smarts to get every criminal in London off his back. Several people want that package, and will stop at nothing to get it. As Nick digs deeper into the case he discovers that the package is the key to a fortune in diamonds left behind by the death of the world’s greatest criminal mastermind: The Falcon. With time running out and more and more people discovering who has the package now (Nick), the Diamond brothers have their work cut out for them.

This book was very good. I was very surprised to find that when I started to read, I was almost at once submersed in the plot. Pretty good for I book I picked up just because I had nothing better to read. For those of you who are fans of British literature, you won’t be disappointed. Originally published in England, this book has all the marks of a great British book.

With relatively short chapters, the pace moves fast, especially when the chapters end in a cliffhanger (which they do often). The novel is a spin off of the 1940s PI movies and also pays homage to the movie The Maltese Falcon with the spoof title It was easy to read, and kept me interested enough to make it to the end of the book. I can’t wait to read the next one in the series.