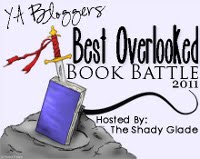 *Returning visitors: scroll down for the latest updates*

Well, it started as a crazy idea in 2010. The idea took off and before you know it, I was in the midst of organizing an epic book battle.

The YA Bloggers Book Battle is a bracket-style judging contest. Our 2010 theme featured the best debut work of 2009 (and a little of 2010). This year for 2011 blog readers have chosen the battle theme as the Best Overlooked Book.

Here's how it will work:

People will have a chance to nominate a book of their choice to take place in the battle. After nominations close, the books will be narrowed down by our lovely Round 1 judges. Books that make the cut will be fit into brackets for Round 2 Judges to read.

Starting in early May, each Round 2 judging panel will read the two books in their bracket and choose a winner. One will move on, one will not. It will all come down to two books in a epic book battle to choose the best!

Updates will periodically be posted here, so if you don't follow the blog, you can bookmark this page and periodically check back to see what's new.

4/7 - Battle Longlist for Round 1 announced