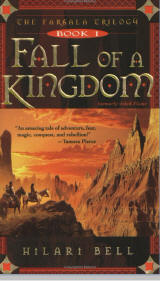 Fall of a Kingdom

Originally published under the name Flame this book is Hilari Bell’s newest trilogy. Journey to the kingdom of Farsala (think ancient Persia) where the deghans rule the countryside. Jiaan, Soraya, and Kavi are all young people who live in this land where magic is legend. And all three of them have their lives changed forever when the Hrum empire turns it’s sights on Farsala.

The Hrum (similar to the Romans) have conquered over half of the known world. But the High Commander of Farsala is determined to stop the Hrum at Farsala’s border. Soraya is convinced her father will win, but he sends her to live in the desert to keep her out of trouble. Jiaan, who is the High Commander’s illegitimate son, is thrilled to accompany his father to the front lines, even though he must endure to scorn of the other deghans. Then there’s Kavi, a peddler who’s trade was ruined when a deghan errantly crippled his hand. Kavi isn’t happy under Deghan Rule, and the Hrum start to look awfully tempting.

It all comes down to a single battle. Will the Hrum defeat the Farsalans, or will the deghans be able to stand the army’s might? The Deghans are convinced they will win because a prophecy telling them Farsala’s finest warrior, Sorahb, will return in the country’s greatest need. But will Sorahb arrive in time?

Told in the three alternating viewpoints, this book can be a little confusing at first. Slow to start off, it eventually pulled me in enough to keep me interested. There’s a lot more going on than just the main plot. In addition to the preparation for the battle, we learn the legend of Sorahb, as well as several social customs of Farsalan culture. Although it is labeled a fantasy, there really isn’t that much magic in it.

For those looking for a pure fantasy, you might be disappointed. But if you’re in for an adventure, make sure you put this one on your “to-read” list.

Nice review of a great book! It's part of a trilogy as well. I don't think the third book is out yet, but I really enjoyed the first two.