Review: The Fifth of March 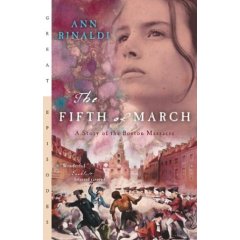 The Fifth of March

Guess I'm on a Rinaldi kick lately. Here's the latest of my reviews:

Fourteen-year-old Rachel Marsh is an indentured servant living in Boston in 1770. She serves none other than John and Abigail Adams as a nursemaid for their two children. As tensions between the colonists and the newly sent British soldiers rises, Rachel struggles to find a “place of her own” in the changing world around her.

Confused by the concept of “becoming a plain American,” Rachel is reluctant to have anything to do with the British private that stands guard outside the Adams’ house every night. However, soon she starts to get to know the solider, Private Matthew Kilroy, despite the persecution of the British soldiers. When the Boston Massacre arrives, Matthew is involved in the attack against the colonist. Now Rachel must decide where her true Place lies: her heart or her home.

Ann Rinaldi is one of the best writers of the historical fiction genre. Her characters are very real, and she uses a lot of dialogue rather than descriptions to set the historical scene. One of the characteristics about books concerning major historical events is that you already know the ending (for the most part). For example, when you read a book on the Titanic, you know the boat is going to sink. So even though I already knew how the book was going to end, it was still very enjoyable. Rinaldi’s writing turns major historical figures into regular people who the reader is able to understand and relate to. The book also contains a little romance for those who like it, but not so much that readers who don’t like love stories will lose interest. A great way to read about a more obscure (but still important) event in American history.

I haven't read any of her books yet....what would be a good one to start with?

BTW, CLOSE KIN (Hollow Kingdom's sequel) was very good - not quite as good as the first, of course, but still good. :)

Hmmm... that's a hard question to answer! This one, Girl in Blue, and Finishing Becca are my personal favorites. I also just got my hands on Nine Days a Queen which is her new one about Lady Jane Grey, and one called the Last Silk Dress which is about the South in the Civil War. My best advice would to probably find a book written about the time period or subject you are most interested in.

Good to know about Close Kin. I got to get my hands on that one!