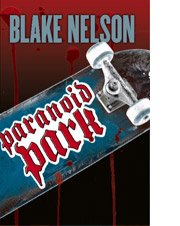 It all started with a skate park. Paranoid park is the roughest skate park in Portland, but it’s also the best. When a 16-year-old Prep gets a chance to skate there, he jumps a the chance. After running into a street skater named Scratch, the two boys decide to ride a train across town. The problem is, a security guard is waiting for them when they arrive at the train yard. After a quick struggle, the security guard is dead and both boys flee the yard. Now the narrator has to deal with the guilt of what has happened to him. Should he tell someone, confess to the police, or keep the whole thing secret?

Told in fast, quick prose, this story easily compels the reader along. Nelson’s writing has the ability to pull readers along with the narrator’s story, completely submersing them in his head. Never once, is the narrator referred to by name, effectively placing him in a role of any normal teenager. Overall this is an interesting and engaging teenage thriller.

Recommended for readers 14 and up. Due to some sexual talk and profanity, I really wouldn’t recommend it to anyone younger without caution.