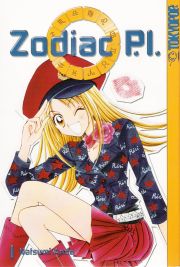 Lili Hoshizawa seems like a normal 13-year-old. She goes to school, hangs out with friends, and lives at home with her family. Her father has a fairly normal job working as a detective for the local police agency, but her mother has been missing for over two years. By day, she earns money casting people’s fortunes under the name “Mademoiselle Lili,” a job usually conducted by her missing mother. But by night, she is Spica P.I.: A mysterious private investigator who solves cases that have even the police themselves scratching their heads.

When a girl at Lili’s school is mysteriously murdered, the police are baffled by the clues and eventually rule the death a suicide. Enter Hiromi Oika, a boy from Lili’s childhood who recently moved back to Japan after earning a college degree in criminal psychology while living in the US. When Hiromi puts himself on the case, Lili is determined to find the murderer before Hiromi in order to save Spica’s reputation.

As it turns out, Lili has one more trick up her sleeve. When her mother disappeared, she left a Star Ring in Lili’s possession. The Ring contains the 12 spirits of the Zodiac, who can cast horoscopes for the victims of any crime. With clues provided by the astrological spirits, Spica is unstoppable!

Lili solves the first case, only to be bombarded by another. Can Spica save the day, or will the murderer go free? Lili is sure she will come out on top, but Hiromi has once again also taken on the mystery. Can Lili solve the case while keeping her identity a secret? Will she ever find out why her mother left two years ago? And why does Hiromi break into a nasty rash every time a girl touches him? The solution, of course, can be found in Zodiac P.I.

For those of you looking for a twist on the same old, Zodiac P.I. offers a unique story in a unique format. A graphic novel told in authentic Japanese format, this book features lovely Manga-style artwork to tells its intriguing story. Don’t be fooled though: the book is read from right-to-left, which can take some getting used to.

Not only does this book have an interesting plot, but the characters are wonderful as well. Lili is easily imaginable as a real person, even though the circumstances surrounding her life are a little fantastical. My favorite characters were the astrological spirits, mostly because each one had a very distinct personality. The book also includes a lot of astrological information, including how to treat other people of a certain sign, and myths surrounding many of the constellations featured in the zodiac.

Recommended for ages 12 and up, although it will appeal most to those who like mysteries or graphic novels. An excellent choice for reluctant readers since both artwork and characters will win over any person’s heart. The first few pages can be a little confusing as background events are established, but keep at it and you will be rewarded!

*Please note* This was originally posted off-site. Clicking on the below link will take you to the full body of my reviews found at www.yabookscentral.com