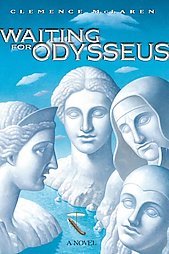 We've all heard the story of Homer's Odyssey: The Greek hero Odysseus is on his way back from the Trojan wars and ends up spending 10 years fighting his way back to his home on Ithaca. This book takes that story to a whole new level.

This is the Odyssey told through the eyes of the women who knew him best. First Penelope, Odysseus' wife tells the story of how they met and fell in love. Next Circe, the sorceress who turns men into swine recounts how she fell for the great hero. Greek goddess Athena recounts how she watches after her favorite mortal, and the story ends with the account of Eurycleia; Odysseus' old nurse who has raised his son in his absence and is the first to recognize him when he comes home.

I have always loved Greek mythology, and I was eager to read this when I first saw it. It turned out not to be the best mythology retelling I've ever read, but it was enough to keep me interested. It is a little more appropriate for female readers (mostly because of the viewpoints) but everyone can enjoy it. It tends to center more around the romance of the story, which gives it a very different feel than the Odyssey. Greek society was very male-oriented and women are often neglected or overlooked in many Greek myths.

Overall, and interesting take on a traditional story.