Today visiting The Shady Glade I have Janet Lee Carey, author of The Beast of Noor

, and the newly released Stealing Death

(which just got a starred review from SLJ. Congrats!). So here's my interview with her, with my questions in bold.

is about a seventeen-year old boy named Kipp who steals the Soul Sack from Death to save the life of the girl he loves. I first had the idea for the book sixteen years ago when I saw Soldier Jack on TV. The Southern Appalachian folk tale about a boy who captures death in a sack was spellbinding. I went into what my family calls a “Janet Trance” and knew I’d write a novel with a similar theme someday. That someday took sixteen years, but once I was ready to write the book I completed the last two hundred and thirty pages in two months. Why so fast? My agent, Irene Kraas, had sold the proposal to Egmont USA and I had to finish the story lickety-split to get it into the Egmont USA fall launch.

Wow. That is pretty fast. It sounds like you wrote a lot of poetry when you were younger. Do you have a favorite poet?

Poetry and songwriting were my main art forms from age thirteen to age twenty-nine when I switched to writing novels. Favorite poet? Dylan Thomas.

What was your funniest writer moment?

Hum . . . I’ve had so many. I drove all the way to the freeway entrance with a teacup on top of my car because I was thinking about dragons. The tea was still in the cup when I retrieved it from the roof, but it was cold. I’d also say having my purse searched at the airport because I was carrying around a heavy glass doorknob – something my character Zoe Flynn was carrying around – when the baggage checker held it up with tilted brows the only thing I could think to say was, “I’m a writer.”

Do you have a favorite book that you enjoyed writing more than others?
I always think the one I’m writing right now is the best yet probably because it hasn’t gone through the ugly adolescent stage of being thoroughly critiqued & revised.

I always have to ask about pets. How long have you had your cat Uke?

Uke’s been with us roughly eight years. She’s the queen of the house. The moment I finished the first draft of Stealing Death

, Uke jumped onto my desk and stepped onto the keyboard. When she stepped away she’d left lettering just below THE END.
It read: mmmmmmmmmmmmmmmmmmmmm. I think that was her paw of approval.

What is the one question no one ever asks you but you wish they would? And you have to answer too!

Most readers know I’m into outreach. Few ask me why I feel it’s so important. The answer is simple. Writing books helps me walk around inside another person’s skin. When one of my characters suffers, I suffer. Hopefully readers also identify with the characters. In Stealing Death

Kipp’s family faces a terrible drought. Drought sets Kipp on a dangerous course bringing him face-to-face with Death. My research into drought-ridden landscapes to create Zolya uncovered these facts – more than one billion people in the world do not have access to clean water, water-related diseases are the leading cause of death in the world, and the chore of hauling water is primarily done by girls who miss out on education through this time intensive chore. 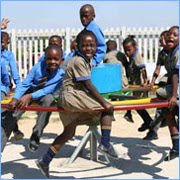 I made a commitment to take action and raise awareness. Enter PlayPumps International. PlayPumps builds clean water pumping systems in sub Saharan Africa. The Pump is designed as a child’s merry-go-round. Children at play pump the communities clean water. After watching the PlayPump videos on their site and hearing the children’s laughter, I was hooked. I’ve set up a giving page on their site: The STEALING DEATH: Water for Life challenge to raise $14,000.00 for a new PlayPump.

Thanks for stopping by and celebrating with us!

Thanks for the great interview questions. I enjoyed visiting The Shady Glade.

If you enjoyed this interview, come join the author chat and book launch party for Stealing Death

And if you'd like to learn more about Janet Lee Carey and her other books, make sure you check out her website. There's some cool stuff over there, including this article on the perfect writing day. You'll really want to check that out. She's got more information about PlayPumps there if you're interested as well.
Posted by Alyssa F at 10:47 AM

oh my gosh! that pay pump thing is so cool! and it's awesome that she's doing fund raising for them. yay! awesome interview, btw :D

I have heard so many good things about Stealing Death! =) And those Playpumps sound like a REALLY good idea!