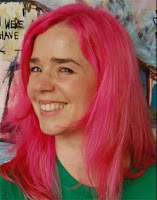 Wrapping up the celebration today I'm happy to introduce Laini Taylor, author of the Faeries of Dreamdark series (Blackbringer

(released tomorrow!). Laini and I got to know each other last year when we were both on the Cybils panel for Fantasy/Science Fiction, so despite being really busy with a new baby, she agreed to answer a few questions for me (my questions in bold).

You must be very busy these days with a new baby and two new books coming out just one month apart. What’s it like having the release of two great books so close together?

Well, actually, the part where the books come out is the easy part :-) It's writing the next ones that's a bit more challenging with a baby in arms! I haven't set up a lot of launch events, though I do have some bookstore and festival readings coming up, and a few blog interviews, but overall it's just a matter of watching my google alerts for reviews and hoping for the best. When Blackbringer

came out two years ago I hadn't scheduled anything, and the day came and went like any other. It was quite anti-climactic, and I've talked to other authors about this. Especially with a first book it's hard not to expect the whole color of the world to change on that day, but . . . nothing actually happens. To other new authors I recommend having a local signing stocked with friends and family to mark the day.

What made you decide to become a writer?

I don't even know, since I can't remember a time when I didn't want to be a writer. There is no "before." I might have been born wanting to be a writer! Ever since I can remember, I've believed this is what I would do "when I grew up."

What is it like having your husband do the artwork for your books? Does he work on them as you write, or is it a mad dash to finish the artwork before the book comes out?

I feel very lucky, and I advise other writers to marry illustrators. That way, you're never surprised by the cover of your book! Ha ha. In truth, though we've been really lucky so far, we know that neither of us has any power when it comes to covers, but at least I've had the security of knowing that Jim wasn't sending any art in that I didn't like. It's really nice and really rare for an author to have so much input into the art in their books. For the most part he's worked from my finished manuscripts, and with Lips Touch

especially he was up late for many nights trying to get it done in time -- including not sleeping for 48 hours just before the deadline!

One of your new books, Lips Touch

, is a collection of short stories. How did that get its start?

After I sent the finished manuscript of my first novel, Blackbringer

, to my editor, Timothy Travaglini, I had a wait of three or four months for my editorial letter. Though I knew I had to write Silksinger

, since it was part of a two-book deal, I didn't feel like I could get started until I know what Tim thought of Blackbringer

. So to keep myself busy I started writing very short stories for fun, and posting them on my blog. Several of these, without premeditation, happened to be about kisses. Jim had the idea that they could combine to make a book, and so we pitched it that way. Now, three years later, here it is!

Any previews of future projects you can give us?

I'm working on another YA right now that's similar in style to the Lips Touch stories, but is one long novel. Jim and I are also developing another collaborative project that's a secret, but I will say that it's for younger readers than the Dreamdark books. I'm really excited about both!

Both sound great! We'll keep an eye out for those. Thanks for stopping by!

And to celebrate Laini's (almost) release day, here's the trailer for Lips Touch if you haven't seen it yet (very cool!). 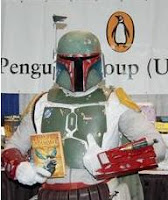 And you really should pick up her other books too. Blackbringer even got a thumbs up from Boba Fett, see? Can't go wrong with that! Laini is also an artist. You can learn more about her, her books, and her artwork Laini's Ladies at her website.
Posted by Alyssa F at 3:42 PM

Hi Laini :)
Thank you for the great interview.
Thanks for the trailer.
I think your books sound intriguing.
Are you on Twitter?
I'm putting you & your books on my ToBeRead list.
:)
All the best,
RKCharron
xoxo

I just bought Blackbringer and I'm super excited to read it. I really enjoyed the interview =)