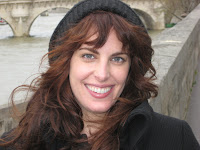 We've got another Lisa visiting! Today I welcome Lisa Ann Sandell to the Shady Glade. Lisa is the author of Song Of The Sparrow

, The Weight of the Sky, and the newly released A Map Of The Known World

. Here's my interview with Lisa, with my questions in bold:

Some of your books are written in free verse and some are regular prose. Is it hard to switch between the two writing styles?

Writing in free verse seems to come more naturally to me than does prose. I had written my first two books in verse, and it was definitely a challenge for me to write the latest one, A Map Of The Known World

, in prose. But I don't think that switching back and forth was necessarily the hard part; rather: just stringing together words in such a sequence that they sound nice.

. The producers took me to Belvedere Castle in the middle of Central Park at night in the middle of winter. It was freezing and the whole place was covered with ice and snow. It was beautiful and sort of dreamy--the sky turned a deep scarlet and the castle was lit up to feel very otherworldly. But the sky had turned red because another huge snowstorm was on the way. And so there I was walking in circles around the castle, trying to sound intelligent and talk about all things Arthurian, while freezing my butt off, trying not to slip and fall down, and waiting to get smacked with a giant snowstorm.

Sounds like some of my college projects in Idaho. You've also done a lot of travelling. What’s your favorite travel destination?

This is a tough question. I've been really lucky and gotten to travel to different parts of the world, and I've enjoyed almost all of the places I've visited, but they're all so spectacularly different, it's hard to pick a favorite. I loved Mongolia, for its vast emptiness and wild beauty. And I love Spain--it's so beautiful and rich and bright and hot and romantic. I guess those would be my two favorite destinations. Can I pick two?

Sure! I would have a hard time deciding between those as well. Well, I guess I would need to visit both first. :) You mention in your FAQs that your love of Arthurian legends was partly your inspiration for Song Of The Sparrow 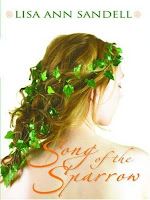 I don't think I'm done. I love the stories and the characters so much, and I got even more attached--especially to Arthur--as I wrote Song of the Sparrow. I would love to revisit them in another book or a poem....something.

That's great to hear! I love anything Arthurian. Any future projects you can give us a sneak peek of right now?

Well, I'm in the very early stages of something new right now. I don't want to say too much, because it's still kind of sketchy in my own head, but I will say it's another YA novel about a girl, but she's in a situation that is so totally different from anything I've ever written about before. I think it'll be very action- and adventure-packed, and something wholly new for me as a writer. I'm really excited about it, and I'll definitely post some information about it when I'm ready. Stay tuned....

We definitely will. It sounds exciting. Thanks for dropping by Lisa!

Thanks so much and happy anniversary and congratulations to The Shady Glade!

To find out more about Lisa Ann Sandell and her books, visit her at her website. Which, by the way, is pretty much one of the coolest author websites I've seen, so you should go check it out. And I'm not just saying that because I'm on her blog link list either. Though that's really cool anyway.

And here's a little surprise for those of you who read all the way to the bottom of this post. See? You need to stay on your toes if you want a chance at the good stuff! Lisa has very generously donated a signed ARC of A Map Of The Known World

for me to give away. So leave me a comment if you want a chance at it.
+1 for comment (make sure you mention that you want to be entered)
+1 for linking to the contest (MUST post a direct link to count)

Rules: The contest is open until September 30th, 2009. This contest is open internationally! The winner will be chosen by a random number generator. Rules about claiming prizes can be found here.
Posted by Alyssa F at 1:53 PM

I would love to win A Map of the Known World!

+1 And I blogged about the contest here.

This may be a silly question, but, is the book all poetry? When I read that some were written in free verse and some in prose that is the impression I got.

Just in case it is, I love poetry! Please enter me for this arc giveaway.
zenfoxflowerATyahooDOTcom

I read all the way to the bottom and I'd love to win it!

please count me in

Please enter my name in your draw. Thanks.
wandanamgreb(at)gmail(dot)com

I've got a library copy of A Map of the Known World in my towering TBR pile...it would be great to own a copy for myself, though!

Thanks for hosting this contest!

I posted a link at my blog: (haleymathiot.blogspot.com)

and on Pulse It (haleyknitz)

Hi! I would like to join this contest. Thank you. :D

Would love to be entered in the contest for this book which sounds so good.

I'd LOVE to win a copy of "A Map of the Known World" It sounds pretty darn amazing.!

I'll blog about it here in a second;

Thanks for the giveaway. I would love to win and read this book.

I've been gone a few days and WOW...have you been busy! Great stuff...my Amazon cart is filling up fast! Keep up the great work

Wow, I can't believe all the international contests you're running! :) Could I enter this one too, please?

It sounds so unusual to me for a whole book to be written in free verse! I don't think I've ever read a non-poetry book like that.

Unless Paradise Lost counts, but I guess that's kind of poetry as well.

Count me in please!

Please enter me in this contest!

I followed your link to Amazon and read the description of the book. An excerpt from it included the line "I want to bargain for trinkets in an Arab market in some distant, dusty land."

I just wanted to say that my husband has done that! Um, but the distant, dusty land is Iraq, and I'm sure you can guess that he's not there on a vacation. Haggling over necklaces, oil lamps, and paintings was one of the highlights of his "trip."

Thanks for the chance.

I love to be entered in your contest.

Oh this sounds good too! Please enter me.

I would like to be entered. Sounds interesting. Thanks!

Love the interview!
I would love to enter the contest!!

This sounds like a really good read! I would love to be entered to win! Thanks for the great giveaway!

This book sounds so good, and I love the cover!

I would love to play please! Thanks.

Great interview! And I love the design of her website, it's gorgeous. I would love to win a copy of this book!

BlackWolf said...
This comment has been removed by the author.
12:16 PM

I would love to be entered!

I own her book Song of the Sparrow and it was my first book in verse. It is also a favorite. She is such a great writer and I'd love to read A Map of the Known World. Count me in.

I would love to win A Map of the Known World! I would like to enter!

thanks for the giveaway!

I would love to win this book!
booksobsession(at)gmail(dot)com

+1 Posted on my sidebar at http://booksobsession.blogspot.com

This book sounds really great and I'd love to win it.

I have a friend who absolutely LOVES Song of the Sparrow. The next time I come across a copy I will GRAB it!

Please enter me. Thanks. =)
mdondero@sprynet.com

I haven't read many books in prose or verse, so I don't really understand the difference. Sounds like a tough time at the Scholastic Book Fair. That would have been interesting!

I would absolutely love to win this book!
+1 sidebar:
http://hookedonyabooks.blogspot.com/

I would absolutely love to be entered!