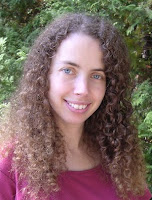 Rolling right along, we have one of my favorite authors visiting today, the wonderful and witty Sarah Beth Durst. Sarah is the author of Into the Wild

, Out of the Wild

, and the almost released Ice

. Sarah's always a delight to talk to, so help me welcome Sarah to The Shady Glade!

You spent a few years living in England. What was the best thing about living abroad?

Best thing about living abroad was that my work permit only lasted 6 months. After that, I was a visitor and legally not allowed to do anything but write. I wrote my first complete novel-length manuscript there. (It was an adult fantasy with way, way, way too many talking animals.) This was rather momentous to me because until that point, I had never completed a full manuscript. I had a zillion story beginnings (and at one point, in elementary school, I actually color coded and indexed all my story beginnings -- I was a somewhat organized child), but finishing a story was my Rubicon. Once I did it, then writing became a lot easier because I knew I could do it, and the whole impossible dream of becoming a writer became a lot more achievable.

Second best thing about living in England was that they have CASTLES. I love castles.

Why write about fairy tales?

"Once upon a time" has enormous power. For many of us, fairy tales were some of the first stories we ever heard and because of that, the archetypes and themes in them are embedded in our subconscious and affect both how we see the world and how we react to and interpret stories. So that makes fairy tales a really powerful tool for a writer. You get to build on, subvert, and satisfy these ingrained reader expectations.

I also just really like them. Witches with houses that walk around on chicken legs, fairy godmothers that pop in and out and have dubious taste in footwear, heroines who fly on the back of the North Wind to castles east of the sun and west of the moon... Great fun to write!

I know from your blog that you love the Star Wars movies. Do you have a favorite movie out of the six? What about favorite character?

Star Wars: A New Hope. It’s the classic. 121 minutes of awesomeness, to quote “How I Met Your Mother.” As for favorite character... ooh, that's tough. I think I'd have to pick R2-D2 because he saves the day at least once in every movie.

That's so true! I never noticed before. Any other favorite movies or TV shows?

For TV... I love Buffy the Vampire Slayer and the short-lived-but-still-awesome Life and Times of Juniper Lee (which was basically a cartoon version of Buffy but minus the whining). Also love Stargate SG-1 and Star Trek TNG. Current shows I watch are American Idol, So You Think You Can Dance, and Project Runway -- I think I love them because they are all about people achieving impossible dreams.

For movies... Princess Bride (one of the very few movies that is as good as the book, and vice versa), Dark Crystal ("by gelfing hand or else by none!"), and Labyrinth (David Bowie = Goblin King = awesome). I spent a large portion of my childhood wanting to be the girl in Labyrinth.

One of my favorite things to read on your blog is your Obscure Fairy Tales Feature. What was the inspiration for these posts?

and Out of the Wild

. I loved the bizarre and obscure tales (like the ones with donkeys that poop gold and the ones with ominous disembodied talking heads that appear once and are never explained) so I thought I'd share some of them. In case anyone is curious, here's a list of all the obscure fairy tales that I've babbled about on my blog.

I laugh so hard every time I read those. We're talking stuff-coming-out-of-my-nose laughter. I know Ice

comes out in October, but do you have any other upcoming projects we can get a sneak peek of?

ICE comes out on October 6th, and I am ridiculously excited about it. This book was a labor of love -- in fact, I wrote it primarily as a love letter to my husband. It also includes a talking polar bear, which I think should be a feature in all love letters.

My next project is called Tigerlily. It is a YA fantasy about magic at Princeton. It will be out in fall 2010, also from Simon & Schuster. It's all about the process of getting into college. And saving the world. And meeting college boys. I'm ridiculously excited about this book too. :)

I can see why, it sounds great. I can't wait to get my hands on Ice

. Thanks for stopping by Sarah! It's always a delight to read your answers.

Thanks so much for interviewing me! Happy blog anniversary!

You can of course learn more about Sarah by visiting her website. Make sure you also check out her blog to see all the new stuff coming next month to celebrate the release of Ice.
Posted by Alyssa F at 1:25 PM

Hey, I've actually read that Fairy Tale about the Donkey that poops gold. I can't remember the name of it though, because I read it in German class. I've long since forgotten most of my German.

Haiku Amy: Yay! Someone else who has heard of that story! It's from the Brothers Grimm, and it's called "The Wishing Table, the Gold Donkey, and the Cudgel in the Sack." Every time someone yells the word "bricklebrit," the donkey poops and vomits gold. Charming.

Hi :)
Thanks for the great interview.
I love learning about the authors I love.
All the best,
RKCharron
xoxo
PS - Thanks again for sharing Sarah.
:)

Love fairy tales, and especially obscure ones! Ever since I took my Russian fairy tale class in college.

Great interview, thank you both!