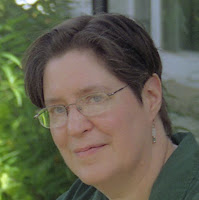 Today I'm super excited to announce that today's guest is Patricia C. Wrede, one of my oldest favorite authors. I grew up on Ms. Wrede's books, including the The Enchanted Forest Chronicles

. These books remain some of my all time favorites today. So without further ado, please welcome Patricia C. Wrede!

has a setting very different from most of your fantasy novels. What gave you the idea to set a fantasy book on the frontier?

I've been wanting to write something with a Western feel for ten or fifteen years now, but it was one of those ideas that just didn't have enough to it to reach critical mass. Then my friend Lois Bujold had me over to watch a video about post-Ice-Age megafauna, and Eff walked into my head, and the main story arc for the trilogy just sort of fell into place.

Some of your older books, including The Enchanted Forest Chronicles

, have had several cover makeovers through the years. Do you have a favorite cover or cover style from your books?

Not really. I loved the Tom Canty cover for Snow White and Rose Red

hardcovers, but I also loved the British covers for the Lyra books. And I'm very pleased with the cover of Thirteenth Child

. I try not to be too picky about covers; that's not really my job (and I have two sisters who are painters who remind me of that occasionally!).

What was it like writing the children's novelizations for the Star Wars prequels?

Well, I'd known intellectually that screenplays are necessarily written from a camera-eye viewpoint, while novels are more usually either omniscient or tight-third-person, but I hadn't realized until I got into them just how much of a challenge it would be to make the conversion. I kept getting halfway through a scene and realizing that the focus had shifted away from my viewpoint character, and having to either backtrack or figure out some other way to keep my viewpoint character from disappearing.

Having written them was a bit surreal - when I finally saw the movies, I knew every bit of dialog that had been cut or rearranged during the final process, and I kept wanting to hit some nonexistent rewind button and make it be the way I "remembered" from the shooting script.

The folks at LucasBooks were great to work with, by the way; they were really patient and helpful and did their best to answer all my questions, even when the answer was "Mr. Lucas hasn't decided about that yet."

Sounds like a fantastic experience! I almost always ask about pets. So can you tell us more about your two cats?

Nimue was a street kitty, rescued at around 9 months by a friend of mine whose cats didn't like her (and who didn't have room in his studio apartment for four cats). I'd been looking for a third cat, so I took her in. She's been with me for fourteen or fifteen years now. She's a medium-hair grey and white tabby, and a tiny 7 pounds under all that fluff (she looks at least twice that size, even if she doesn't fluff up.) She's sweet, but not terribly pushy.

Cazaril is a five-year-old Maine Coon/Abyssinian that I got from a shelter in Wisconsin two years ago. He has brown and black tabby markings, and he is a complete attention hog. He's the only cat I've ever seen who will wake his owner up in the morning and then run into the living room to be played with instead of into the kitchen to be fed! He's incredibly sweet and gentle, but he IS pushy.

I know The Enchanted Forest Chronicles

have been adapted to books on tape. Have any of your other books been recorded? What do you think of the adaptations?

The only official recordings are the Listening Library audiobooks of the four Enchanted Forest books, and I love the way they did them - they cast the voices, so the audiobooks are almost like radio plays! And they did a brilliant job of casting, too.

I completely agree. Those are some of my favorite audiobook recordings. Any new projects we can look forward to?

is the first book of a trilogy, all of which is under contract, so there will be two more of those (I'm midway through the second). After that, I don't know. There are too many interesting possibilities, and I never know which one is going to spark when. My to-write queue was up to 25 possible projects the last time I looked, and that was two years ago. I don't want to know what it's up to now.

Wow. That would be a daunting pile. What is the one question no one ever asks you but you wish they would? And the answer too!

"Would you please take this million-dollar advance on your next book?" "Yes, thank you!"

Thanks so much for stopping by! It's been an honor. :)

If you'd like to learn more about Patricia C. Wrede or her books, visit her website. You can learn all sorts of interesting things. For instance, did you know that Talking to Dragons

was the first Enchanted Forest book to be published? The other three are prequels!
Posted by Alyssa F at 4:12 PM

Wow. Kudos for getting an interview with one of my all-time favorite authors (not least because she once wrote a book with my name in the title)!!! I'm glad to hear that she liked the Tom Canty illustration for the fairy tale book - that was definitely my favorite illustration, too. I recently fell in love with Eff in the newest book, and can't wait for the next to come out!
Wonderful post and interview. Really. I'm kind of in shock. :-)

Shock pretty much describes it for me too. I emailed her on the off chance she'd reply, although it mentioned all over her website that she doesn't respond personally to emails. And then boom! There it was in my inbox. You could have blown me over with a feather.

I've read several of the books in the Fairy Tale series but I don't believe I've read any of this authors books before.