My guest today is Shanna Swendson, author of the book Enchanted, Inc.

and it's three sequels. And although it's technically an adult book, it definitely has lots of YA appeal. I really enjoyed it! So I asked Shanna to join me for a little chat. Here's our conversation with my questions in bold.

What’s the best thing about being a writer?

My job is to sit around the house and make up stories. It just doesn't get any better than that!

The copy editor would probably say it's "just." I don't really have a particular favorite that I use on purpose.

Do you think you’d like to work at Magic, Spells, and Illusions, Inc.?

Well, it would involve putting on nice clothes and going to a real office, so that would be a downside even if magic's involved, and considering that I based a lot of the corporate hijinks on jobs I've had, I'm not sure it would be the place for me. I'd rather stay at home and write. I don't deal well with office politics.

I noticed on your bio that you like to bake. Do you have a recipe that’s your favorite to make?

I don't have any one favorite. I'm known among my friends for my chocolate-chip cookies. I just use the recipe in the Betty Crocker cookbook, but somehow they seem to come out particularly well when I make them. But I also love making bread, muffins, scones, pies, cakes and a lot of different kinds of cookies.

You also have contributed to several essay anthologies, including one about the TV show Firefly. Are you a fan? If so, who’s your favorite Firefly character? 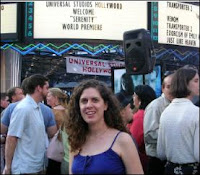 I am a HUGE Firefly fan, going back to the first broadcast of the first episode. Getting to go to the Hollywood premiere party for Serenity is one of the craziest and best things to happen in my life. My favorite character is Simon because I was intrigued by the story possibilities surrounding him. I thought it was interesting that the most wanted criminal on a ship full of criminals was the nice, clean-cut, civilized guy. He lost everything, but in a weird kind of way, that was the best thing that could have happened to him because it meant he would really have to stretch himself and could find out what he was really made of. (That was a lot of what my Firefly essay was about.)

You would get along so well with my brother. He's a big fan too. So any new projects you are allowed to tell us about?

Not really, unfortunately. I've got some things I've been working on, but haven't sold them yet. I'm just starting a new book that I think will be a lot of fun, so we'll see where it goes.

Thanks for stopping by to help celebrate!

To learn more about Shanna and her books, check out her website. And if you're already a fan, make sure you check out the website for all the fun book extras she's got over there.
Posted by Alyssa F at 8:37 AM

Hi :)
Thank you for the great interview with Shanna Swendson.
And thanks to Shanna for sharing.
Is Shanna on Twitter?
I searched but couldn't find her.
Enchanted, Inc. sounds great.
All the best,
RKCharron
xxoo

Great interview. I have not heard of Shanna before. The book cover is adorable.

Thanks for sharing the interview. I'm left with the question, "Should I watch (become addicted to) Firefly?" I don't have enough time as it is, but this Simon person sounds intriguing...

Unfortunately, I havent read any of Shanna's books. I do remember watching Firefly when it first premiered but then it got cancelled.