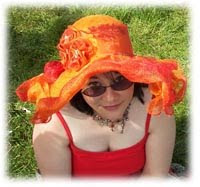 I'm so happy to have Kimberly Pauley here to help celebrate my 3rd blogoversary today. Kim is the author of the novel Sucks to Be Me: The All-True Confessions of Mina Hamilton, Teen Vampire (maybe)

. You may also know her as her alter-ego The YA Books Goddess as the creator of YA Books Central.com. I first met her when I became a volunteer reviewer for that site, and I can thank her for my start doing "official" book reviews. Over the past three years she's become a good friend, and she even gave me some college major advice too (thanks for that!). I had a chance to pull her away from her revisions of the Still Sucks to Be Me (out next year) to ask a few questions. So here's my interview with Kim, with my questions in bold.

What’s the best thing about being a published author?

Definitely the fans. I mean, there's tons of other great stuff too, but it's so exciting and gratifying when someone likes your book enough to write you and tell you about it.

Tell us about your writing environment.

A little too messy. Not so much by choice, exactly, but there never seems to be enough time in the day anymore since I've become a mom! I actually tend to write in one of two different places: in my office, which has lots and lots of books or on the front porch if the weather is nice.

Ooh, I bet the writing on the porch is beautiful. I know your son was born in the same year that Sucks to Be Me

was first published. Was it crazy being a new mom and a new author at the same time?

Very. I actually found out my novel was getting published the same week I figured out I was pregnant. Then Max actually arrived before the book did. :-) I wish now that I'd gotten more writing done on the second book when I was pregnant (though I did get all the revisions on the first book done), but I was really thinking about other things. But, then again, it would have been a very different book so I suppose it worked out anyway!

What do you think sets Sucks to Be Me

apart from other vampire books?

Mostly humor, I suppose. And that you don't have to be a vampire fan to enjoy it. I've tried to include enough "normal" teen stuff in there that you can read and like the book even if you aren't into bloodsuckers.

I'll agree with that description. Sucks to Be Me

is soon to be released in Spanish. Is it strange seeing your novel in a different language?

Well, that puts you one step ahead of me. I've never heard of Croatian. Can you give us a sneak peek into Still Sucks to Be Me?

Well, possible spoilers, so only read ahead if you've read the first book! Mina and her family are relocated to somewhere she completely doesn't expect and everything feels like it's turned upside down on her (George, Serena, etc.). An old enemy (Guess who!) pops up with a vengeance. And a new friend or two complicates things too. Hmmmm, is that vague enough?

How did YA Books Central get it’s start?

I was the YA Books Guide for The Mining Company, which became About.com. Then they scrapped almost all of their teen sites and I didn't want to just toss out all of the reviews and interviews I'd done. So I started YA Books Central. It was pretty basic at first and small, but it's gotten a lot bigger over the years and is now one of the largest teen (& kids!) lit sites on the Internet. Which is cool, but it takes a lot of time. I'm lucky to have a lot of volunteers to help with it!

Thanks for coming by to celebrate Kim!

If you'd like to learn more about Kimberly Pauley, you can visit her on her website, or catch up with her at YA Books Central.
Posted by Alyssa F at 2:43 PM

I can't wait to read sucks to be me. I love a vamp book with some humor. I checked out the website, pretty cool, I will be watching that one!

I've been telling everyone who is anyone about your blog and all the cool stuff you're doing this month. Please, please don't let September end!!

I can't wait till the next book comes out next year. Thanks for the early spoilers