Two guest posts in a row! And this is another good one. Joining me today is Charlotte from The Book on the Hill. She's going to share one of her favorite holiday traditions from her childhood. Be sure to browse her blog too. And now sit back and enjoy!
-Alyssa

The Snowman : A Childhood Memory

Christmas was coming. Like every year, a little girl was waiting patiently for the Père-Noël to come. Not Father Christmas nor Santa, for this little girl lived in France. She was 8, and enjoying the bubbly excitment that the Christmas holidays brought into her home. That year, friends of her parents were there to celebrate. English friends. And they had brought with them a video tape, on which a snowman was smiling. The little girl understood English, since her father was British. And she could read the title on the box. But she wasn’t prepared for what she was about to see on her television screen. That year, this little girl discovered The Snowman. And little did she know that 16 years later, she would still be watching the same video every Christmas, with the same excitment and stars in her eyes...

Oh, you caught me! Yes, that little girl was me. When I first saw The Snowman, I fell in love with it instantly.

The Snowman is originally a children’s book by Raymond Briggs, published in 1978. It was turned into an short animated movie, directed by Dianne Jackson four years after the book’s publication. Since my first encounter with The Snowman was with the movie, I will not talk about the book here, although it deserves as much attention as its moving-image adaptation. Both are considered classics now. 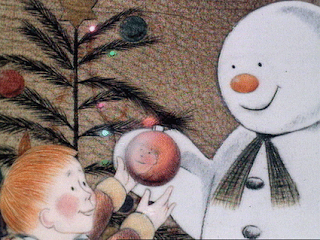 The Snowman tells the story of a young boy, who witnesses his own snowman coming to life. First the boy invites the Snowman in his house, where he tries to understand how human’s furnitures and toys work (weirdly he seems to particularly like the fridge...!).

Then they go for a ride on a motorcycle, scare a fox or two, and at one point just take flight together. This is where THE song comes in : “Walking in the Air”, composed by Howard Blake and sung by Peter Auty.

Oh my, how I love this song, and the way those two characters glide over the lands and seas (my favourite part has always been the whale, I love whales !) Here is the video of this scene. It’s magical and powerful, and will with no doubt get you into a Christmas mood !

After having flown into an aurora borealis (a totally normal thing to do, right ?!), they end up partying with plenty of dancing snowmen from all over the globe. The little boy gets to meet Father Christmas, who gives him a cute little scarf. After having spent the time of his life, the boy is taken home by his new frosty friend.

Now, that’s the tough part. The next morning, the boy wakes up to find that the Snowman has melted. I swear, the way the boy falls on his knees in the last image when he realizes his loss makes me shed a tear every time. Why? Why did he have to melt? It’s like Hedwig falling through the sky in her cage: It’s just sad and unfair ! Oh well... 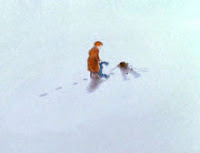 Yes, I can get quite emotional when talking about The Snowman. Because it is indeed a beautiful movie, and one that is linked to my childhood. The pencil lines are incredibly poetic and light, the story is touching and funny, the music is magical, no dialogues are needed, and most of all : who never dreamt of riding a motorbike with a snowman ? I sure have. I think that from the moment I saw The Snowman, I clung to the hope that my own snowmen would take me away and show me the world while flying through the skies. With of course, someone singing “Walking in the Air” in the background.

For all of you who are lucky enough to have snow this december, I advise you to build a snowman. And if you’re really lucky, you might even see him winking...

If you haven’t got The Snowman at home, you can watch it here.
And here is The Snowman’s official website. 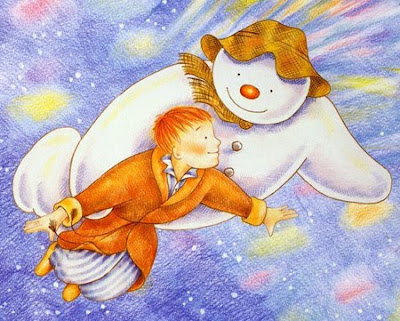 Thank you for having me Alyssa ! :)

great story. i haven't read the snowman...yet. thanks for sharing it charlotte!

Call me sheltered - but I don't think I've ever seen this one. We always watched Prince Gnome.. I can't remember the name of the movie now.. darn!

Aw, how cute. I don't think I've ever watched this one though.