The Legend of Holly Claus

by Brittney Ryan and Laurel Long

The land of Forever (land of the Immortals) is ruled over by King Nicholas, better known to the world as Santa Claus. In the winter of 1878 Santa receives a letter from a young boy that asks Santa what he wants for Christmas. This simple act allows Santa to have his dearest wish granted, and the King and Queen of Forever soon have a daughter, Princess Holly Claus.

Holly's heart is the purest and gentlest in all the world, but a jealous sorcerer curses her heart to become frozen in ice, sentencing Holly to be forever kept in cold climates lest her heart melt. The gates of Forever are closed shut, and Santa can no longer bring Christmas joy to the world. It's up to Holly to take the matter in her own hands as she escapes to Victorian New York with her animal friends to once more bring joy to the world. 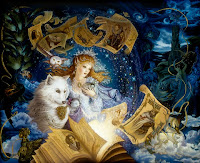 This book is has a very fairy-tale feel to it, which I think adds to the story. It can be a little cliche at times, but not necessarily in a bad way. I think that particular aspect would not be noticed so much by children readers. It is a hefty read though (600 pages) so it's not a great book for reluctant readers.

Despite its flaws, the premise is original and interesting and adds the perfect blend of magic and romance to the magic of the Christmas legend. Definitely a great read for fantasy readers looking for something a little different around the holidays.

Now, the absolute best, best thing about this book are the illustrations that are sprinkled throughout the book. They are wonderfully beautiful. So when I found out shortly after getting the above book that there was also a picture book, I was ecstatic. My favorite thing about the book, the illustrations, were to be reproduced larger and in full color. Was there a disadvantage? 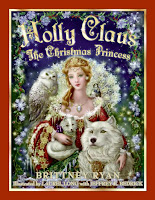 Keep in mind that I hadn't read the book yet at this point, just flipped through it. I went to Amazon to buy Holly Claus: The Christmas Princess

(the picture book) and was surprised to find that although the novel had pretty much all 5 star reviews, the picture book had lots of negative press. Most of these had to do with the fact that there were gaps left in the plot of the picture book and too many questions were left over when it was over. But the full color illustrations were too much of a pull, so I bought the book anyway.

Keeping in mind the negative reviews I decided to read the picture book first. I'm so glad I did. Rather than be disappointed with the gaps in the picture book (yes, there are some gaps) I was delighted to find them filled in by reading the book. So I would definitely recommend if you're going to pick up the picture book at all, do it BEFORE reading the novel.

I'm not going to deny that there aren't problems with the picture book version, because there are. Mostly the plot gaps. That being said, the design of the picture is breathtaking. Seeing the illustrations larger made them all the more magical and they are stunning in color. I can see children falling in love with this book (the picture version) as a child and then discovering the magic of the full novel as they get older.

Wow, those sample illustrations look so stunning that I am going to look for the books. Thanks for the recommendation on the order for reading them!

They really are magnificant. I mean, the book is good too but the illustrations really make it.

I'm with you - the design of that picture is absolutely beautiful! And the story sounds cute and wonderful, with Holly Claus and aller her animals.
I'm interested in reading them despite the problems, just because of the illustrations. :-)

Okay, Okay...I just put it in my Amazon cart. There is another book "Kringle" that looks interesting. Illustrations are such a big part of a reading experience. All my kids are older now but when they were younger I was a picture book nut. Some of my favorite Christmas picture books are:

If everyone on my guest list wanted books I'd be the happiest Santa ever!-

Are you talking about Kringle by Tony Abbot? I've heard about that one and it looks interesting, but I haven't read it yet. My brother used to love his other books though, so it's probably a safe bet.

It's so funny you posted about this book. I'd never heard of it and I came across it because one of my co-workers had read another book with illustrations by Laurel Long, The Lady and the Lion, so I checked out the picture book of Holly Claus as well. I didn't even know there was a novel-we don't have it at my library. The illustrations are beautiful! Thanks for posting about this one!:)

The illustrations are amazing and I already know that a friend of mine would love this book.

Hi everyone ! I am glad to see how much you like the Legend of Holly Claus. You can check out my blog where there's info about the author Brittney Ryan, news and events, and the message of Holly to the children of the world.